Why I Stayed for So Long in an Abusive Relationship

Domestic violence, although quite pervasive, is often a topic rife with stigma, shame and misconceptions. Ironically, the victim, who is in most need of help and validation is placed in the “hot seat,” scrutinized by some for “staying,” and shamed. The reactions by some, who are not intimately aware of how abuse works to control the victim, adds to the shame and self blame that perpetuates the cycle of abuse. How can we realistically expect victims to seek help when so many respond by casting blame erroneously on the one suffering?

As a survivor myself, I feel a national conversation is warranted to help dispel some of the myths and falsehoods surrounding domestic violence. For a problem so widespread and devastating that affects people of all races, socioeconomic status and educational levels, we have to do a better job of addressing these issues, both in concrete ways and in promoting education and outreach.

With the recent disappearance and murder of Gabby Petito, the nation’s attention to domestic violence has been stirred again. As a survivor of domestic assault, the story of Gabby stings of familiarity, regret and deep sorrow. Looking back on the years I spent in an abusive relationship, I am intimately aware that I am one of the “lucky ones.” Every year, thousands of women die as a result of domestic violence.

As a survivor, I feel like I have a responsibility to speak out. There are times, like now, that I have taken to social media and shared bits and pieces of my story, particularly when I see people placing blame on the victim. For a problem that is actually quite pervasive, it’s disheartening that there is still so much lack of awareness surrounding these issues. As a woman who survived both physical and psychological abuse, I no longer blame myself for the abuse that occurred and I am immensely proud of the strength and resilience it took for me to walk away and rebuild my life. The process of disengaging and cutting ties from an abusive relationship, for many, is a very challenging one. 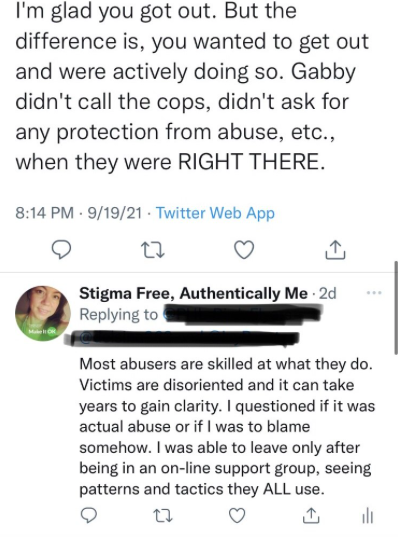 The sobering statistics below, from the Bureau of Justice Statistics’ national crime victimization survey, demonstrates the magnitude of this problem that has devastated so many lives:

The prevalence of domestic violence is more than likely underestimated because many victims do not disclose the abuse. For some, doing so might be dangerous and escalate the violence in the home. Shame and embarrassment might prevent some from disclosing. Many times the victim blames themselves and downplays the severity of the problem. Victims often expend a lot of energy in maintaining the peace in the home and doing so can appear to keep problems at bay. Even the victim can falsely reassure themselves that things have changed and are better for now. Unfortunately, it doesn’t take much to disrupt this delicate balance and violence can occur.

Most who have never been in an abusive relationship ask the question: “Why did you stay?” Some who I have interacted with online have asked the question related to Gabby: “Why did she stay? Why didn’t she ask the police for help?” This again places blame on the victim, and yet this conversation I feel needs to be explored to help others understand the complexity of abusive relationships. I cannot answer for Gabby or any other victim. I only can share in my own words why I stayed for so long and why I eventually left.

Why did I stay so long?

My abusive partner had convinced me that I was the problem. He was skilled at highlighting my weaknesses at opportune times to cause constant self-doubt. As someone willing to examine my own weaknesses, I took what he said to heart and worked very hard to “change” for the better. He would chip away slowly and intentionally at my self-esteem by occasionally dropping insulting comments that were made to erode my self-esteem and to manage down my expectations of the relationship.

2. He was an excellent liar and I believed him.

In the beginning, he lied with such flair and so confidently that I could not see beyond his “mask.” My gut and intuition knew something was wrong, but when I confronted him, I got painted as insecure and paranoid. Without substantiation, I could not prove what I knew to be true. He was an extremely private person and he kept me guessing. This caused a lot of confusion and self-doubt and I bought into his gaslighting and thought perhaps I was wrong and should be more trusting of him.

3. He used my mental health diagnosis as a means to discredit and stonewall me.

When I wanted to discuss our relationship and our commitment to one another, he would say: “Amy, I believe you are getting sick again” and would refuse further communication.

4. I had not spent enough time developing myself and my own confidence in order to have good boundaries.

I lacked the ability at the time to protect myself, because I had not yet fully learned to love myself.

5. The relationship mimicked past unresolved trauma and I stayed to remedy it.

Traumatic events in my childhood resulted in a lifetime of feeling invisible and devalued. My ex rarely had me on social media, he kept me hidden, and he often did not consider my feelings. He also refused to fully commit to me. I was following deeply embedded, historical patterns which took a lot of time for me to fully recognize and unravel.

7. I was raised without knowing my biological father and my step-father was distant, intimidating and abusive, at times.

When abuse is part of your childhood experience, it can be difficult to expect more from others in relationships than what was originally given to us by our own caretakers.

8. For many years, I lacked the knowledge and awareness regarding domestic violence and abuse.

I knew there was something wrong in our relationship. There was physical abuse that would occur, but it was infrequent. The times it occurred I was so shocked by it, I did not process what happened until years later. I  did not realize the extent to which I monitored my behavior and maintained a certain amount of agreeableness towards him to ensure that I remained safe in his presence.

9. And last, the exacerbation of depression and anxiety caused by his abuse left me with little energy to address the abuse.

I became increasingly sick and even lost jobs and relationships. I was isolated and carried a lot of shame and didn’t feel like I had the network of support at the time to truly leave and “let go.”

How did I finally decide to leave?

There were a couple of turning points in our relationship. Yet, the greatest tool was gaining knowledge and support. I was fairly miserable in the relationship and it had made me physically ill. I wanted to feel better physically and that was part of the motivation to leave him. I still loved him, but my desire to heal and feel somewhat “normal” again prompted me to start researching online to understand what was occurring.

I began to follow and join social media platforms that discussed abusive relationships and narcissism, etc. I began to discover that my ex was a lot like so many others who are abusive. I gained support through sharing my story with other victims and I learned that I wasn’t alone. The support groups helped me to define the chaos I had been experiencing. It took seeing all the memes and the discussions between others for it to truly sink in that the relationship was indeed very abusive. I knew that I had to, as trite as this sounds, “let go” and love myself fully. I had lost a lot of time and dignity, and I was ready to let go. It was a long process that did not happen over night. Part of me was still reluctant to leave the illusion of what I felt we had, but time revealed that he was not honest, had cheated often and that he was both psychologically and physically abusive. I spent time rebuilding my self-esteem and have not seen him since 2016.

Abusive people employ tactics that can cause self-doubt, fear and an erosion of self-esteem in their victims. These individuals do not begin the relationship revealing their abusive ways, in fact, the abuse is something that often surfaces after trust is gained. This is why it can be so disillusioning. The abuse can be intermittent and can be in-between the “good times.” It is cyclical and the goal of abuse is to keep the victim confused and disoriented so that control is maintained.

Healthy relationships allow for disagreements and for the needs of each partner to be considered and met. The power in the relationship is shared and communication is encouraged. One should not be left questioning their partner’s honesty or sincerity. And any act of physical intimidation, threats or violence are a sign that boundaries have been violated and the relationship is a dangerous one.

Given the prevalence of domestic violence, we must do better to educate and inform, provide resources and assistance to those in need, and on-going support to victims and their families. All areas in society from churches to schools to medical intuitions, etc. should be better equipped to provide victims with the support needed to heal from the trauma that results from violence in the home. Doing so will facilitate a system of better accountability that keeps women and children, those who are most at risk, from harm. The benefits to society will be immeasurable.

If you or a loved one is experiencing domestic violence from your partner, please reach out to the National Domestic Hotline at hotline.org or (800).799.SAFE (7233).

Photo by Sonnie Hiles on Unsplash

I am currently using the modalities: mindfulness, meditation, and yoga to continue my goal of self discovery and healing. I also hope to use my lived experiences to bring awareness and advocacy to facilitate systemic and attitudinal changes in order to fight the stigma surrounding mental illness. My educational background and employment experience has been in both social work and recreation programming serving elders and those living with disabilities. I'm currently receiving disability with the hope of working in time either part-time or in a creative way that doesn't compromise my health in any way. I am in the process of writing a book on the issues surrounding employment and mental health. Using my voice is one of the most important choices I will make going forward to rebuild my life and move my life forward. My hobbies include: photography, writing, singing on SMULE (karaoke), camping, and playing with my dog, Gracie.

merlotmayhem72
Want more of The Mighty?
You can find even more stories on our Home page. There, you’ll also find thoughts and questions by our community.
Take Me Home