How 'Medicare for All' Would Help My Bipolar Disorder

“Medicare for All” is a deal-breaker for me when it comes to the presidential election. I’d like to share a bit of my story and explain why. It is all too familiar for many, I’m sure.

I knew I had experienced depressive episodes throughout my life. In conjunction with mania (though I didn’t recognize it as such at the time), these episodes greatly affected my life. I have quit almost every single job I have had in the midst of crisis.

In June 2016, I started a new job full time that I was excited about after being unemployed for a couple months after my last mental breakdown. I went back to school part time. I studied for and obtained a certification for work. I moved out of my mom’s house (again) into a new apartment with my boyfriend and dying cat. My fellow bipolar sisters and brothers can probably sense the impending doom.

It all came crashing down, as it tends to when the depression hits. After months of spiraling depression (and mixed episodes, though I had no idea what those were at the time), I had two options: I could kill myself or I could try to get help.

I opened up to my boyfriend about what I was going through. He was so supportive. It was the perfect response, if there ever was one. He offered to help me with the tasks I was really struggling with that were making everything harder. I thought this would be enough to help me. But the spiral downwards continued. I was having panic attacks all the time, I was paranoid, and dealing with scary and uncontrollable suicidal ideation.

During all of my breaks at work, I tried to find a doctor through my insurance, while also dealing with veterinarian phone calls about my cat and the cancer that would eventually take her life.

At a time when I desperately needed those breaks and rest, I couldn’t — because I was sick and needed help. It seemed impossible to find it. Every doctor I called was not accepting new patients or no longer accepted my insurance. How could this be?

In February 2017, I had a panic attack that just wouldn’t end. I went to the ER at the hospital across the street from me (if it wasn’t so close, I know I wouldn’t have gone). I read from a helpful Redditer that they would be able to give me medication to stop the panic attack. They did, and unfortunately, they couldn’t do more because they were a small hospital and didn’t have psychiatric staff.

The doctor I met with referred me to a mental health center which was also close to my home. The catch: they didn’t accept my insurance. Luckily, they offered a sliding scale and I was able to receive therapy for $40 each visit. After a month or so of therapy, I’d be able to see a psychiatrist.

I know, that probably seems like an amazing price considering they typically charge $200+ per visit. But with my salary, I couldn’t afford it. I had very little extra funds after my expenses. I knew I needed help, though. I needed help or my life was going to end.

So, I went to therapy, while basic things like food went on my credit cards. The depression I was experiencing was so severe, my therapist suggested I get into a general practitioner as soon as possible to start antidepressants, since I would need a few more appointments with her before I could see a psychiatrist.

Thanks to ZocDoc, I found literally the only doctor that accepted my insurance. They were a sports medicine clinic and they treated depression. There, I was misdiagnosed with depression and anxiety. I was started on antidepressants.

A few weeks later, I finally got into the psychiatrist. Unfortunately, I was only able to see her a couple times but I’ll never forget her. She was the first person I felt like actually cared and tried to understand. She didn’t just ask me the standard questions on the evaluation. She knew there was more there, and she dove deeper. After one visit, I was properly diagnosed with bipolar disorder and post-traumatic stress disorder (PTSD). I would later have the “mixed features” specifier added to my bipolar diagnosis.

But see, at this point, it was so bad. Every day, it was only getting worse. I tried everything I could think of to get through each day. And when it finally became clear that I was dealing with a serious mental illness (and not just situational depression, as I had always assumed) I knew I had to put my health first or I was going to die.

In March 2017, I quit my job because I just couldn’t get out of bed anymore. I tried everything I could, though. I went to human resources. I wasn’t employed long enough to qualify for short-term disability (which seems evil). I tried to explain my situation and ask for accommodations (like to work from home so, you know, I could throw up in the privacy of my own home instead of running to the bathroom and then being sent home), and it was like they didn’t understand. And I didn’t have the capacity to keep trying. I didn’t know what else to do.

I hoped with a little time things would improve and I’d be able to work again, but that didn’t happen. I had to break my apartment lease and move back to my mom’s house. I applied and was approved for Medicaid. The search for treatment began. It would be months before I was able to see a new psychiatrist. I almost exhausted all of my medication options over the course of a year before I gave up trying (for many reasons, but that’s another story).

And now, 2.5 years later, I’m aware of the harsh reality that if I even try to work on a part time basis, I will lose my health insurance. I am also aware of the reality that my insurance dictates which medication I can access. My only hope is being approved for disability benefits and/or finding medication that allows me to work.

I could go out and try to work and not have to worry about losing my health insurance and food stamps. It wouldn’t be such a big deal if it didn’t work out. I wouldn’t have to jump through so many hoops just to receive health insurance and help with food. So, I am stuck. Unless, miraculously, I am able to find the right treatment that allows me to work again, or am approved for disability benefits.

I know there are many others in a similar situation. And a situation just like this could happen to anyone at any time. We need Medicare for All. Our lives depend on it. We shouldn’t have to go into debt because we got sick. Our health insurance should not be tied to our ability to work. It is cruel and unjust.

Share
or  Copy Link
Link copied to clipboard.
Be first
151 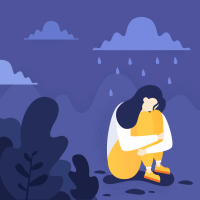