Tattoos can be a lot of things. They can indicate membership in a community, be a reminder of a happy occasion, commemorate the passing of a loved one, be a work of art, be a relic of a drunken night, espouse a cause or have a personal meaning that no one else is party to.

Self-harm is something a lot of us have tried, in one form or another. And the scars produced by it have many meanings. They can be reminders that we lived through a really bad time or reminders that we chose a really bad coping mechanism. Some people look at their own scars and feel lucky to have survived. Some look and feel shame.

Now, a Philadelphia tattoo studio, Crown and Feather Tattoo Co., is offering to cover up people’s self-harm scars with free tattoos. The service is so popular that the studio has had to hire more tattoo artists to keep up with the demand.

They call this effort “Project Tsukurou,” a word derived from Kintsugi, a Japanese art form that involves repairing broken pottery with resin and gold dust. I wrote about Kintsugi recently. Rebuilding oneself after a breakdown and thinking about making it a work of art was very empowering to me. Apparently, the tattoo artists and their patrons felt the same way.

I have scars from self-harm and I have tattoos. The tattoos don’t cover the scars but are located in close proximity. The scars have faded, nearly invisible now since the dozens of years since they were created. I am over that, healthier than that now. (Once someone asked me how I quit self-harm. I replied, “I didn’t need to anymore.”)

At first, I was ashamed of those scars. I tried to hide them with wide bracelets and watchbands. Later, I made my peace with them. They were now a part of me, a reminder of a time of despair and despondency. They were a reminder never to let things get that bad again. That there are things I can now do to alleviate the pain or the numbness, should it ever get that bad again anyway.

Mostly, I don’t look at the scars anymore. But my tattoos are right there next to them. One is a semicolon, a symbol and reminder of suicide prevention. The other is the :): symbol for bipolar disorder. When I look at these tattoos, I think of the reality of both my disorder and my new, better, life-saving coping mechanisms.

Of course, tattoos are not a choice that everyone is prepared to make. Some people feel they shouldn’t modify their body in that way. But tattoos can possibly give someone a measure of pride that their self-harming days are over. They can look at their bodies and see not mutilations, but life-affirming works of art.

So far, the only tattoo studio I know of performing this service for free is the one in Philly. But most tattoo studios are used to covering regretted tattoos with new ones. They should be able to cover the scars of self-harm as well. And if they don’t do it for free, well, one could think of the money as an investment in healing or moving forward or creating a work of art where once there was only a reminder of pain.

Photo by Kristian Angelo on Unsplash 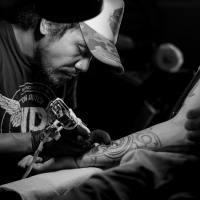