Our Neurodiverse Kids With 'Aggressive' Behavior Deserve Empathy, Not Judgment

I received some gut-wrenching news this weekend. The kind that leaves you sobbing uncontrollably — swollen eyes, angry at the world.

I had no idea my son Owen’s behavior had been spiraling at school. According to his school, he’s been “aggressive” to other kids and teachers. He’s being moved to a smaller class. “Regressing.” The word that cuts through me like a knife.

It felt like my heart was being ripped from my chest. That’s the thing in this world. The world of having a child with a brain tumor, brain injury, epilepsy, hydrocephalus , ADHD, etc.

Within days of hearing “his scans are clear –no new growth,” and celebrating, we are hit with this. Medical stuff I’ve learned to cope with. I’m always prepared for the worst. But the trauma his brain has endured and the repercussions of that are devastating.

To have a child who can and does learn, who’s smart and wants to learn, but behaviors and impulses are blocking him from thriving – it’s heartbreaking and earth-shattering.

He’s been doing well at home, so I was blindsided. You’d think after every card we’ve been dealt that I’d be a little tougher now… but sometimes things just gut me.

I think some of it stems from all the news articles I’ve seen of teachers quitting because of behaviors in classrooms. In almost every article, people worry about their neuro-typical kids’ safety (and I get it to an extent, they should seek safety first) and it feels like they blame parents and technology and everything under the sun, but no one seems to think about the injustice that is the special education system.

The one that throws our kids into classrooms without the support they need, the system that fails so many kids.

No one seems to mention what the child who’s showing these behaviors must be going through.

I’ve seen mothers and people I respect deeply think children with disabilities should be separated… as if our children are unworthy to be near “typical” children. Like they should be contained away from everyone else like some zoo exhibit. Parents who don’t know how to explain our children’s behaviors to their children. Please, parents, now is the time to teach your children compassion instead of teaching fear.

And what about the child who has behavior issues because of their disability? What about their parents? They could be a parent like me — one who does everything for their child. Have you ever held your child down for a blood draw without a single tear falling? I have. Have you ever held a mask of anesthesia to your kid’s face while he cried and screamed for it to stop and yelled “Mommy, no, mommy, no” until his eyes rolled back into his head? All without a single tear? I have. Have you argued and fought with a family member you love because they don’t understand your child? I have. Have you smiled and laughed and made small talk with others while your child was having a second brain surgery in a weekend? I have.

So the next time you worry about your neuro-typical child seeing another child with a disability become violent, I beg you: teach them empathy.

Teach them about the “unspeakable” things that might be happening to that child.

Teach them not to fear things they might not understand.

Even in the disability community – it can seem like everything is fine and accepted until you’re the parent with the “aggressive” kid. Do you know the amount of sadness you feel when you don’t even fit in in your own community? People seem to be more comfortable with ADHD, sensory issues, brain tumors and “all that jazz” until that same kid shows a single ounce of aggression — then it’s an entirely new ball game.

I wouldn’t wish this pain on my worst enemy.

I beg each of you when you read a story or witness something jarring, put yourself in the other person’s shoes… could you walk a day in them? What reaction do you wish you would have seen?

The day before they found Owen’s brain tumor, I wasn’t a brain tumor mom either. I never thought my kid would be the one other parents’ feared… until he was.

My heart is broken. My heart is shattered. I want to give up. I want to run away and hide. I want to hold my precious child and tell him everything will be OK.

I don’t want to face a world that won’t accept him. Who won’t take a chance to truly know him.

I’m begging you please understand that my child isn’t defined by his behaviors.

He is so much more.

He deserves people in his corner. He deserves to be seen for who he truly is, not how his disabilities and injuries affect him.

He deserves a mom who will fight for him, and that is exactly what I plan to do after I finish grieving all this news.

After all, I am human. 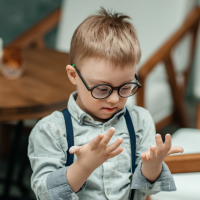