I Want You to Read My Psychiatric Hospital Diary Entries

Toward the end of last year, I spent two weeks in a psychiatric hospital in Melbourne. This is the third time I’ve been in such a hospital, but my first time in Melbourne, a city I only just moved to earlier in the year. The reason for this most recent admission was my difficulty living and working with borderline personality disorder (BPD), and specifically an invalidating workplace which culminated in me self-harming for the first time in over two years. The reason I want to share my diaries is to record from first person what the hospital is really like; the heightened states, the intensity, as well as the boredom and the great struggles, but also the great joys that can be experienced there. I have read a number of articles about what it is like to be in hospital and also on the horror of being discharged back into the world, but I think a more personal account could shine a more vivid light. Many readers will know exactly what I’m describing, but for friends and families of people battling mental illness, I hope this can bring some great insight and compassion.

Just as an update for 2020, it hasn’t been an easy time since I left hospital, especially in finding more suitable work, but I will keep fighting with the same resilience as I was when I was in the hospital toward a life worth living.

A final note on how I’ve used names. I was powerfully impacted by meeting a number of people while in hospital. For obvious reasons, I have avoided using any of their names. However, there are two people who feature throughout and I’ve given them randomly selected initials so the reader can identify them. I’ve stolen this initials trick from my favorite writer Helen Garner’s own journals published last year.

Hospital Journals: On the Inside (October 2019, Melbourne, Australia)

Admissions. Overwhelmed and the realization that this was how low I had sunk. I was back here again. At night I could not sleep til after midnight. Foreign bed. Foreign clinic. Familiar feeling of failure.

Woken up before 7 and back into the familiar hospital drill of shower, breakfast and walk. Almost exactly the same as my previous Sydney hospital. I still haven’t connected with any fellow patients; hesitant to do so before I’ve settled and knowing how fast and deeply I connect. Instead I focused on my therapy group sessions. 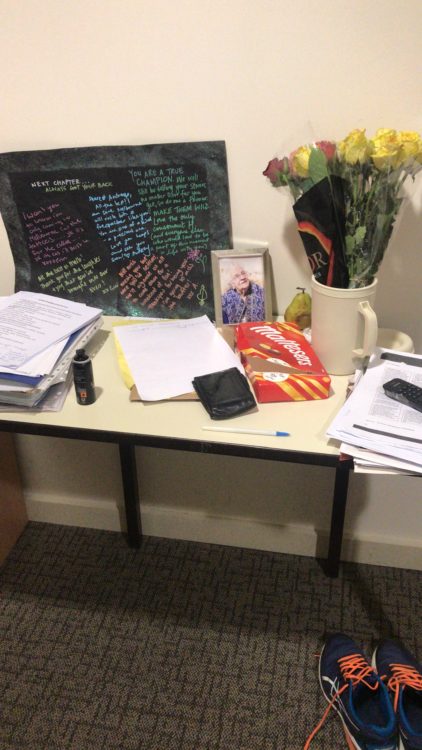 This day was most memorable for meeting M and E. This happened in the second group of the day which was a dialectical behavior therapy (DBT) self-soothe group. The first group of the day on acceptance and commitment therapy was sold out and so it was I came to the DBT group. However, the facilitator allowed two final people to enter the room: a woman who immediately declared that she was happy on the floor giving off immediate, kinetic sexual energy, and a tall bespectacled guy who was very handsome in a dry way. He had a faint, throaty voice that sounded like it was being stifled. Again, I had to moderate my verbal participation in the group because I had done self-soothe twice before and had a self-soothe box sitting at home. But when the facilitator asked us for examples of self-soothe that we already use, the girl on the floor described how when she was in the most profound pain, she would run water and place objects under it to capture all the nuances of possible sound and soothe her broken soul. So beautiful in its soothed agony.

At dinner, this duo came and sat at our table and their names were revealed to be M and E. Soon, I’m not sure the context, M began talking about how he had just been transferred from the ICU. The way he said it I knew immediately he had survived a suicide attempt. I felt a surge of compassion. Not just a male suicide statistic, but a survivor standing in front of me. Seated at the table, there was an immediate disconnect between the act of suicide and the very smart, very funny and insightful man seated next to us. But why a disconnect? My own experience of protracted mental health disintegration has proven without ceasing that even the one you never expect can be depressed, can self-harm, can contemplate annihilation and can be diagnosed with BPD (“you’re too nice to be borderline”).

My mum’s 70th birthday. It felt bleak to be in hospital on such a significant day for her. My new friends distracted me. Undoubtedly, a crew is forming. At the end of the night, M gave me a hug and I feel already deeply bonded. A powerful force.

Four sets of visitors, a brief, underwhelming visit down the street and read my book about the child killer Mary Bell. Wishing to be with M. Am I already smitten with idealization? I came back from down the street feeling a void. I wanted to see M again but had no idea where to find him. And that is how I spent the day of my mum’s 70th birthday party.

I woke at 4 a.m. with the feeling of being abandoned by my family. Feeling left out of Mum’s 70th party. No family had yet visited me in hospital (though most interstate). Less worthy of attention and care because I am partnerless, family-less, childless and once again in a mental hospital just like my deceased aunt, the former bipolar black sheep of the family. Am I now to take over that mantle? Am I too difficult? Am I selfish, abrasive, vindictive and divisive? The anger, hurt and abandonment festered. I fired off four lengthy messages to Mum at 5:56 a.m.

At breakfast, M shared with me he exited the vulnerable emotions group yesterday, walked straight to his room, turned the shower on and lay down in the shower and tried for many minutes to let the water wash away his urge to suicide. Jesus wept.

A day of breakthrough. Many unanswered questions followed me to the morning’s first group session titled: Understanding Grief and Loss. As I stood outside the Unit 2 group room, I had no inclination of what was to come deep inside me.

As soon as the group began and people started to detail their experience of grief and loss, I moved from my head to my heart, actually deep into my soul. The facilitator had a much more genuine and real manner than the other hospital facilitators, and was not afraid to open herself up and use personal examples from her real life. The pain in everybody’s experience was overwhelming and there was a consensus on the major role grief had played in the manifestation and development of our mental illnesses. Scratch the mental illness and grief, and loss is not too far below the surface. Two people spoke of the crushing, ricocheting loss of their mothers when they were young. Neither could just simply move on, as they were told to do by those uncomfortable by their grief. They remain defined and even tortured by the loss of their mothers. Both said they are captured with the fear they will soon lose another cherished one who will be too ripped from their lives. At this, my soul spoke that this is indeed what happened to me. My eyes filled with water and my body began to heave. Would I need to leave the room? The facilitator then asked if everyone in the group was OK.

“No,” I sobbed. “I’m sorry. And I know I shouldn’t say sorry. It’s just that what you are talking about is exactly what happened to me: eight deaths one after the other, in less than 10 years. Some were old and expected and others were cruelly and untimely ripped.”

Here, the sobs stifled my words. A pause. And then I felt a great wave of empathy around the room. And after a minute or so, I collected myself and offered that I’ve learnt to be thankful for every breath (some in the group aren’t), and to not take anyone for granted, and be thankful for everyone dear because at any moment they or we could be gone. This was easily the best group I’ve done inside the clinic.

Oh M. So broken. So unsupported. So punitive against himself. Exhausted from trying to take care of and please others. Still that unprotected little boy helpless and cowering under the stairs: just fighting to survive.

Tears fell perfectly down his face as he shared his pain of being refused his only real life desire to have children. My heart broke. This beautiful, aching man who no one had ever bothered to look after. All he wanted was to be held by those who loved him. But now a few of us were by his side trying to comfort him and gently correct his cognitive distortions by suggesting this was his illness talking: the polarized nevers, the all-or-nothings, the hopeless future, the lies. When I was sitting contemplating my own demise, I felt them too, except I felt that I would never be in a relationship, never reconcile my faith and my sexuality and would always feel this way. But it was a lie. I told M I also had to reconcile myself to not being a father. I am not sure if that was helpful to hear or not. From across the abyss, I wanted him to know he wasn’t alone and that he was worthy of great love. M’s soul seemed to lift and the grip of annihilation loosened. His life would again be for the living at the end of the day.

Out of hospital. Feel so desolate. Confused. Stateless. Anchorless. As if my very being, my very soul, my very mind had been cut adrift. Hard to concentrate. Hard to make any sense of the outside world. The pain of separation from the hospital cocoon. My people. I want to be back in their embrace. At least this time I won’t have to work tomorrow. But instead tonight I will see my friend commissioned as a minister in a new congregation. I know it will be painful to be among so many people who have no idea what I’ve just been through, nor see the lostness in my eyes. Maybe they will. How can I make this about my friend? It is probably time I prayed for some help outside my own failing being. My chest has gone out in sympathy with acid reflux.