The “best case,” that is what my doctors told me about my second diagnosis with cancer. I had the “good” cancer, the one most treatable, a hormone-positive breast cancer. The plan was straightforward, and in my case, I was told my stage one invasive ductal carcinoma of the left breast could be cured. I underwent a mastectomy and had clean margins. I was to be a success and spend a few years on tamoxifen therapy. It was 2013, and my life would never be the same.

Like many, I was “lucky” to have had my cancer found on a routine screening mammography. Found early and not having spread to my lymph nodes meant they expected a full recovery. They expected to have me simply take a pill once a day for a few years, at first for five years, later planned to be 10. That plan didn’t go so well. At six years in, this medication and my body would have a falling out. It would take me nearly two years to understand what had happened.

In a very rare number of breast cancer patients, something goes wrong and the medication meant to prevent a recurrence of cancer can, in its own way, become another cancer of sorts. That is what it did to me. I am part of the small percentage of patients who will develop tamoxifen retinopathy. Tamoxifen is not alone, as there are other medications, which in a rare small group of people, can become toxic instead of preventative therapies. With breast cancer being the all-encompassing diagnosis to deal with, it is very easy to fall behind in the other important preventative measures that we should all take. All you can think about is preventing another cancer; the routine physicals, labs and testing can take a back seat.

For reasons that medical science doesn’t understand yet and that baffles my personal doctors, tamoxifen suddenly stopped being a preventative for breast cancer and became “trapped” of sorts in my lymph system. Rather than my body having a use for the tamoxifen, it became a toxin, starting to cause irreversible damage that perhaps could have been prevented, if it could have been caught sooner, and that is a big “if.” It’s so rare that most eye doctors have never and will never have a patient similar to me in their care. The deposits in the macular of my eyes form crystal-like deposits affecting my vision. Stopping the medication could reduce them over time, but there is no guarantee. I added yet another specialist to the long list of amazing providers on my team. I would become his one and only patient with what he called a “classic case” of tamoxifen retinopathy. He couldn’t say how this would play out, or if I would lose vision, or how fast. I started to feel as if I needed to hurry up and see as much of the world as I could.

My lymphatic system, already damaged by lymphedema, now became “attached” to a deposit of unused tamoxifen in my eyes and ears. I started to experience increasing difficulty seeing. The world would become blurry all of a sudden, and even using a large television for a computer monitor doesn’t cut it sometimes. Street signs would have glares that are impossible for me to see through. In the morning I would see more, but some days as early as 11 a.m., my vision would be reduced to a blurry and patchy world. I used my paintbrush to distract myself. Turning up the music and “painting through the glare” is how I would cope. I became fascinated with how different a painting would look to me at night, versus first thing in the morning after a good night’s sleep. I still wish I could find better words to explain the changes in my art as my eyes shift. I have a fascination about playing with paint at different times in the day, at different shifts in my vision. 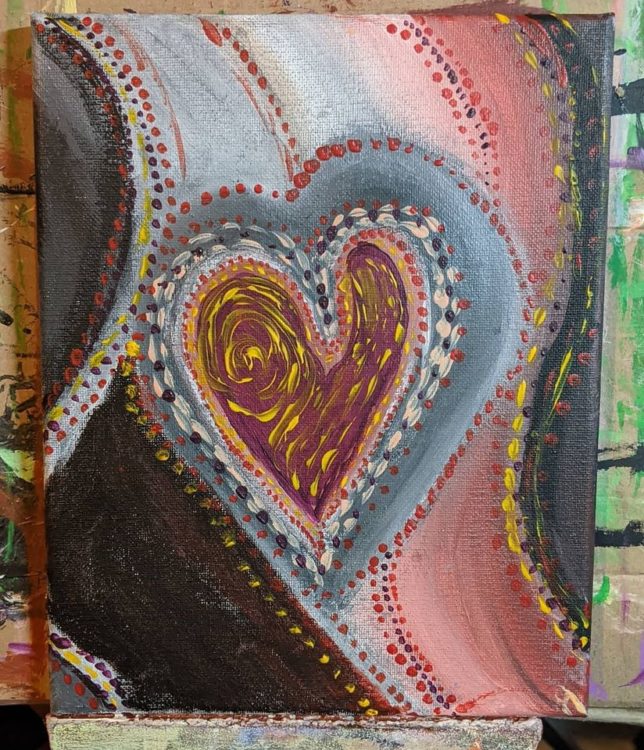 To this day, I still can’t read or see correctly. This loss of vision started after six years of treatment with tamoxifen. It wasn’t during the first year of treatment, as one would expect. I had let my guard down and skipped a year of eye exams. Why? To save money and an unhealthy fear. I felt my glasses could last another year. I now know my failure to get the blurred vision looked at was my own fear. My protective brain was trying to get me not to consider it by ignoring the symptoms, having no idea that decision would lead to unforeseen issues. I would end up taking the medication for about another year after the onset of symptoms.

Ophthalmologists were told to look out for signs of tamoxifen retinopathy, but patients were not. As patients, it would be a short sentence in some large package full of information about breast cancer. There wasn’t any kind of strong warning from my care providers. I looked at tamoxifen as my anti-cancer pill and failed to even consider that it could have any kind of negative effect. In my case, it all started with that occasional blurry vision, which turned into an everyday struggle.

It wouldn’t take long for the retina specialist to figure out the vision problem. They would take all kinds of images of my eyes, including a special OCT image with drops that made it hard to keep them open. There were the normal tests and the field of vision tests. The result would be a “classic case” of tamoxifen retinopathy. They found cysts on both retinas and deposits in the macular of both eyes. These toxic deposits were stealing my vision. The solution was stopping the medication. The damage can’t be undone, but by stopping the medication, there was hope of reducing the deposits in the macular of both eyes over time. In the worst case, I would go blind. I was fearful, but had a sudden odd sense of defiance; this will not define me. I was worried about stopping the medication and having the cancer come back. It’s a hard line to walk, trying to not have cancer again, and not losing any more parts of me in the process. It was enough to cause me to spend some quality time working that thought out in my head, the possibility of blindness. Of course, I stopped the tamoxifen, but I worried, what if it keeps getting worse? I thought about that question every day and it drove me to do more in spite of it.

It is hard to explain what that moment was like, being told that I could stay as I was, which was blurry, or go blind with time. There was no way to “remove” or treat the cysts or deposits. Only time would tell if I would lose more vision or not. It’s hard for doctors to have to say, “I don’t know.” It’s even harder to hear it. We want our providers to have all the answers, to be able to patch us back up and keep us going in life. It’s the unknown that drives them to find answers and our hopes that they can do it in our lifetimes.

I didn’t have a lot of time to worry, as a new worry was what damage was done to my ears. I had developed a terrible tinnitus that really couldn’t be stopped, and I was often told things I listened to were “too loud,” or that I couldn’t understand someone right in front of me if they were too far from me. Once again there was testing, and the findings were that the tamoxifen toxicity had also exacerbated my hearing loss from driving an ambulance. I had to shake my head in disbelief. How can I really be going blind and deaf? This I didn’t recall being in my “welcome to the world of breast cancer” instructions. It was a real fear, and it would take well over a year of monitoring for the doctors to be able to figure out what direction my newest rare disorder diagnosis would go in.

I would be lucky. The progression of my hearing loss and vision issues have been treated with hearing aids, and oral medication to help my eyes work a bit better, albeit not a real treatment. The effect is the difference between needing to walk with a blind cane, or getting to leave it at home, a freedom that was not lost on me. I don’t have a fear of using tools. Actually, I am a fan of useful items, but if I do not need it for a little while, or maybe for a few more years, I win. These other medical hurdles I have had to jump over, still, did not define me.

I’ve chosen to share this story, in part for the selfish reason of perhaps meeting another patient like me, with tamoxifen retinopathy or tamoxifen OTOtoxicity. Here’s looking for another zebra. I encourage you to not skip routine exams. Keep up with your eye and ear health, see a dentist and do all the things we should do to keep ourselves as healthy as we can, for as long as we can. That’s my best advice for how I live with rare incurable disorders.