Birth mother, birth parent, first mother, biological mother… each woman prefers a certain terminology when speaking about their adoption journey. Regardless of it all….you, the woman who gave birth, you’re a mother.

I was never fond of being called a birth mother — but I was so saddened by the entire experience and feeling like I didn’t have a voice, so just stuck with birth mother. It’s as if I felt guilty taking the title mother… but felt disrespected like I was some baby-making machine. There are not enough stories about birth mothers. Not enough support.

The stories you do hear are fictional stories and the birth mother is usually a young woman who either has challenges with addiction or very young and cannot parent a child.

Then you see the Lifetime channel stories where the birth mothers are the villains. It’s so disgraceful. Birth mothers are strong, selfless, beautiful humans. They give someone the ultimate gift, something they were unable to do… I was able to bless their family with a beautiful baby.

The reason for these stereotypes is because we are shamed into remaining quiet…because society views the parents who adopt the child as a savior.

Not all birth mothers feel this way, but many do. Here is the raw truth of being a birth mother.

Her birthdays are the hardest. The most painful. Waking up from the emergency C-section on that Christmas Eve morning in 2004.

Seeing my daughter in the NICU for the first time, not yet knowing that this first time seeing her would soon be my last. I studied every single inch of her face. I counted her toes and fingers. Held my face gently close to hers so I could try to remember the sound of her breathing.

I named her Faith.

I appreciated the fact her new parents agreed to having her middle name be Faith. I really respected them for that. They didn’t have to do that for me.

I left the hospital childless, with a fake birth certificate and the tiny little the hat she wore. I held that hat with me as I slept for months.

I still have that hat, folded away in my dresser. Never washed it. Born at 26 weeks. Holding her… my god was that bittersweet. At this point I agreed to the open adoption, but nothing was set in stone. She was still mine.

I remember weeping to the nurse who handed her to me when I would go see her in the NICU. She comforted me as she knew I was choosing adoption. The entire experience was traumatic. I didn’t want to leave her. Knowing what day I was being discharged was like a countdown, a countdown to a painful reality.

It doesn’t get easier, time does not heal all wounds; maybe for other birth mom’s, but not for my journey. You just learn to put a band aid over your broken heart. You are told to move on, go about your life. I didn’t know how to.

As each birthday passes I think “this is it, the year I am at peace with it all, I can move on with life.”

Her 17th birthday just passed. This year was difficult. Every year is hard, but sometimes hits differently. Each year I’m overcome with so much sadness.

Yes, this is my life and I had an unplanned pregnancy out of wedlock. Yes, I take full responsibility for my choices, yes I was young but I was still an adult…I was 21 years old and in a toxic relationship.

I say all this because no matter what there is going to be those people who are judgmental, insensitive and lacking any empathy. No matter what path I would have chosen, those same people would judge me.

If I chose to parent I would have needed government assistance and other accommodations to get by.

Then I am judged by some who say “I could never give up my baby.” As if she was a piece of trash I threw away. This enrages me, because adoption is not the easy way out. The path I choose was selfless and the most difficult decision I would ever make. It’s always the people who have no idea what life was like at that moment. You can’t win. Damned if you do, dammed if you don’t.

Being a birth mother for me has been a very painful experience. I feel like I live a double life. It is a strange feeling.

I really let the grief consume me… it made me feel so dysfunctional at times over the last 17 years. I really struggled thorough my journey. I struggled to come to terms with what happened, to accept what my reality was. I still struggle with adoption.

Being a birth mother is a feeling like no other, a feeling I wouldn’t want anyone to ever feel. It truly changes you.

The feeling of sadness where your heart literally aches — you’re heartbroken. You feel that knot in your throat trying to contain the emotions.

I miss her. I miss everything I lost with her. I feel like I failed so many, not just her.
The adoption agency was a joke in my opinion. Now that I am older, less vulnerable, wiser and more educated — I realized they will say whatever it takes to convince the birth mother her child is better off without her so their clients (potential parents) can have a baby.

They make you think that it will be OK because they glorify open adoption as a choice.

What they don’t tell you is there is nothing set in stone with open adoption. Once you surrender your parental rights, it’s over… that’s it.

You put all your trust and hope in these parents not to do you wrong. You have no rights.

The broken promises, the lack of support and therapy for the birth mother. They hand you a book called “How to say goodbye to your baby” or a book on open adoption, along with some pamphlets. Then they send you on your way. They wish you well and scoot you out the door.

They say the baby doesn’t remember being separated…

Yet according to Adoption.org, “Experts have considered separation from a child’s birth parents, even as an infant, a traumatic event. Which means every adopted child will experience early trauma in at least one form. Everything the child had been used to, even in utero, the sights, sounds, and smells are gone.”

I was looking at old photos of my (birth) daughter. I came across a few photos— these photos you see me giving a forced smile. I was miserable. These pictures she was still just a newborn. It was too soon to be watching another woman and man holding her. It felt wrong, unnatural… I can literally still feel the pain I was experiencing in that very moment. I questioned if open adoption was right for me. Every time I saw and visited her, it was like opening up that wound, over and over again… never healing. Every visit was a trigger. I had to stay involved. I didn’t want to lose her again. I wanted her to know who I was. I learned to become numb to the pain over the years. 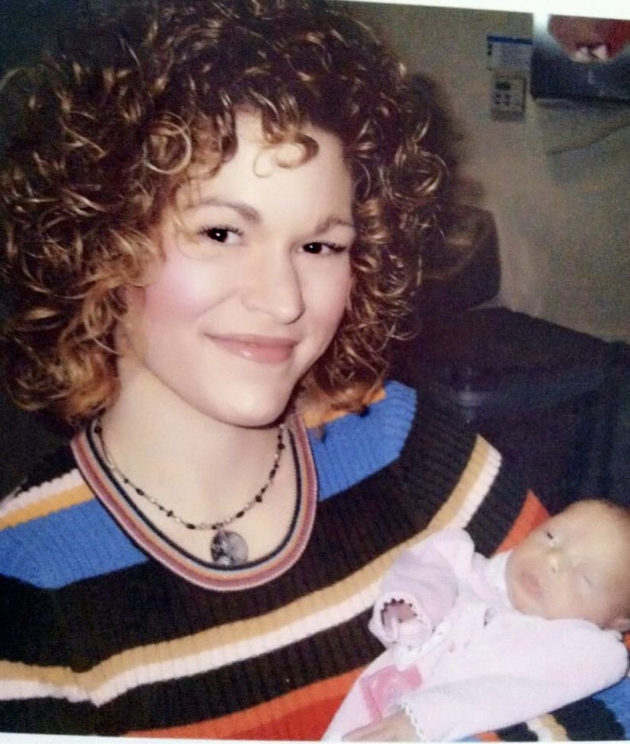 In these photos I was only about six weeks postpartum. Of course I wanted to see my (birth) daughter, but it was very uncomfortable. I was depressed, mourning my child, still healing from the c-section, still binding my breasts to help stop milk supply, my hormones were raging, I was experiencing postpartum depression along with everything else.

I know under all the hurt, sadness, and pain… that I did what was best. I wanted her to have a beautiful life.

To all the birth mother’s who are still in pain — and even to those who are at peace.

You are amazing, don’t ever forget that.

Jacquelyn B
•
Follow
jacquelynhffmn
Want more of The Mighty?
You can find even more stories on our Home page. There, you’ll also find thoughts and questions by our community.
Take Me Home