What If My Sleeplessness Is a Gift?

It’s been over four years since I’ve slept without struggle or some manner (or combination) of sleep aid. For much of this stretch I’ve further grappled with anxiety, guilt, and fear surrounding the question as to whether I’d ever sleep “normally” again.

But in recent months I’ve tried to approach my chronic condition differently. I decided to explore the possibility that the opposite could be true.

What if my sleeplessness was/is a gift?

It felt like a worthwhile question to ask, if not in pursuit of a clear prescriptive answer, at least as an attempt to reframe the “problem” of my insomnia.

It can be so easy, and perhaps common, to blame our illnesses (both physical and mental) for our failure to conform to some outside definition of stasis.

People are supposed to sleep, and I can’t sleep, so therefore something is wrong with me and my sleeplessness is that thing.

This limited perspective can be helpful in terms of framing a condition from which we’d naturally want to seek some improvement, some alleviation of our suffering, but it doesn’t really leave many openings for hope, does it? Especially when a “fix” remains elusive. That’s not a judgment on anyone who does this, so much as an observation of the pattern I had fallen into for a long time that had not been serving me very well.

Treating my insomnia as a problem, with an ever-out-of-reach solution, has not gotten me very far over the past few years. If anything, it only added more pressure to the many other challenges of everyday life (all of them exacerbated by lack of sleep) and the additional physical and mental diagnoses I’ve also been living with for a while.

I tried melatonin, which helped and still does help (in low doses) but it didn’t “cure” me.

I alternated herbal teas for sleep and relaxation. I tried weighted blankets.

I switched my mattress. Hot showers before bed didn’t work, neither did exercise (not completely). I went on a prescription, ultimately, which to be honest has been the only approach to work reliably. But I don’t love taking the medication I utilize (side effects), and the overall challenge of restful sleep still persists, despite my healthier baseline.

With gratitude towards all of these attempted solutions, and acknowledgement that chronic insomnia remains a real problem that for me requires treatment, I still think the idea of opening up our perspective (to this or any health condition) holds some possibility for providing some solace.

If I look at sleeplessness as a gift, it opens up the potential for it to add to my life as well as take away from it. I do tend to fall into the trap of believing challenges like this are black and white, good or evil, and easily treatable if only I were better about finding and subscribing to the perfect solution.

That’s not how life works, though, most of the time.

A secret I don’t mention to most people is that this most recent and prolonged bout of severe insomnia began for me at exactly the same time as one of the biggest opportunities of my life as a professional became a real possibility.

That’s right. A chance to achieve an incredible life goal presented itself, and my response was to immediately stop sleeping.

I’m an independent filmmaker. A few years ago, a script I wrote made its way to an actor whose attachment to the project would have immediately secured our funding. This would have “launched” my career, 13 years after I scratched together my first short film using my student credit card. The opportunity was everything I had been waiting for – or so I thought.

The short version of the story is that it didn’t work out, not with that actor or several others following, and that a few years passed before I would make another film. This is actually a very normal outcome in the film industry, but I didn’t completely understand that at the time and further had hope that I and my script were different. You sort of have to believe that, to have any sort of chance.

Over those years of waiting, many more things changed. A day job I had held for all my professional life degraded from a generally positive environment for me to a toxic one. My wife and I decided to start a family and then struggled with fertility. I began to feel like a failure on several levels.

At the same time, I kept a tenuous hold on faith. Even when everything I just summarized coalesced around a supreme low point for my mental health, resulting not only in sleeplessness but a deep depressive episode, that required medical intervention and emergency treatment — I leaned on my friends and family and I tried to keep my focus on what was good in my life.

And that willingness, in the face of the many challenges contributing to my lonely wakeful nights (and more!) is what has helped me to live with struggles I might have, and to remember more consistently that I’m not alone out there, as an insomniac or whatever else.

Here’s how I know that …

When the next opportunity to direct a film presented itself, it was because I was gifted an idea around 3 a.m. for a story about two insomniacs who randomly meet at the only place open for coffee in their Brooklyn neighborhood, and then decide to keep each other company.

That idea became my second feature film, “The Sleepless,” which was recently released. In a way, I think in producing “The Sleepless,” I was attempting to provide that company, that connection between alienated perspectives, to myself. By then I had gotten a little used to not sleeping some ideal amount of hours, and I had found a way to mostly function like everyone else, around my condition.

My condition. Not my problem.

Because, you know what? I’m right where I am supposed to be today, even if I couldn’t understand that this has always been true, even when I was struggling most severely. Keeping the faith has been what mattered, along with reframing my insomnia in these more helpful terms.

So. What if my insomnia is a gift?

I have to say that it has been. Dealing with my sleeplessness, instead of seeking to solve it, has led to much growth.

“The Sleepless” has been playing on Amazon Prime and some other VOD platforms, and people are watching it, and as far as I can tell they are seeing their experience with the condition reflected back at them. That – not some defined solution to the undefined problem of my daily living  – is what makes it sometimes easier for me to sleep at night. 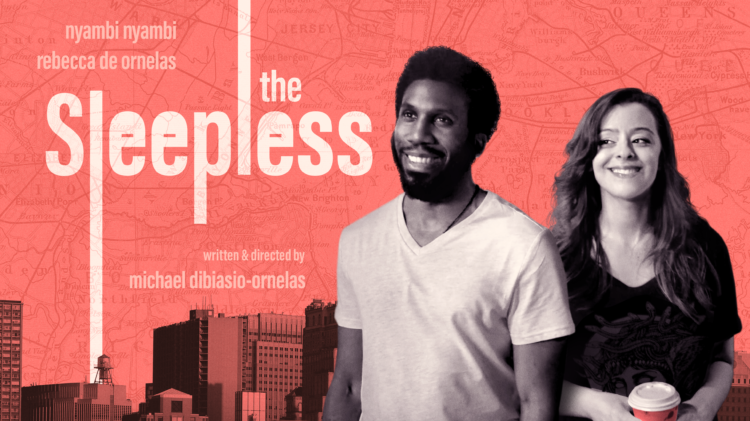 But it’s not the only thing that helps. My family grew in 2020, with the birth of my daughter. I live in a new place where I experience more peace on a daily basis, and I resigned from that job that wasn’t serving me anymore.
Do my worries (new and old) still keep me up at night? Sometimes. But now, while I’m not perfect about it, I don’t fight them as much.

We don’t always know right away, or ever with certainty, whether a challenge from life is a gift to us or not. I don’t meant to suggest they all are. How we choose to frame our response to such challenges, though, can in my experience at least lead us more closely towards coping and even thriving, while we wait for a clear answer.

Michael DiBiasio-Ornelas is an award-winning Writer and Filmmaker currently residing in South Burlington, VT. His latest film, The Sleepless, was named “Best U.S. Feature” by the 2020 New York Independent Cinema Awards, “Best Drama” at the 2020 Alternative Film Festival, and “Best Experimental Feature” at the 2020 Montreal Independent Film Festival. The Sleepless premiered as the closing film at the 2020 Big Apple Film Festival, where it also received the NYC Cityscape Award. Michael’s first feature, The Videoblogs, screened nationally in 2016, and was called “...a provocative indie” by RogerEbert.com. His first novel, Cessation, published in 2021. Michael is a graduate of Columbia University. He is most proud of becoming a dad to his badass daughter in 2020.

mdibiasio
Want more of The Mighty?
You can find even more stories on our Home page. There, you’ll also find thoughts and questions by our community.
Take Me Home