My mental illness journey began 15 years ago as I started college. I sought psychiatric help for increasing depression and anxiety. My doctor put me on an antidepressant which seemed to help a bit. Driving along the country roads with the windows down in my truck, I had hope for the first time. If we could just get my anxiety under control, I’d be on my way to a happy, productive life.

I had no idea how things would spiral into an unimaginable breakdown and a complete change in my world.

After the success with my first antidepressant, we decided to add on a medication for my suffocating anxiety. However, 72 hours after starting it, I was in the ER having attempted suicide — a risk that, though very small, did exist with that type of medication. I could no longer take anything like it, which eliminated all of the most common class of depression and anxiety medications.

After a decade of trying almost every medication, supplement and lifestyle change possible, things only improved small amounts for a short time, at best. I would quickly return to the highly anxious and deeply depressed state I had been in for so long. More than 10 years from the night when I tried to take my life, I had managed to hold on to a pretty good part-time job, and I had escaped an emotionally abusive marriage — but those things still didn’t do much to resolve how I felt at my core. I felt lost, yet somehow felt trapped. I felt exhausted but still felt panicked. I felt nothing, while concurrently, I felt everything. I felt defeated, resigned, useless, and ultimately … quite hopeless. I just felt incapable of living, as if the world could do things that I just couldn’t do. I have a seizure disorder, fibromyalgia and autism spectrum disorder (ASD) as well, but none of those caused me nearly the pain, grief, fear and guilt of being mentally ill to the point of incapacitation.

By just a few years ago, I was so severely depressed that ended up in a psychiatric hospital three times, because I was on the verge of suicide.

My anxiety was at a point where I could not go to work without sobbing before leaving home, then getting there and throwing up, shaking, crying, and finally leaving just in time to collapse in a ball of tears. A workplace where I adored my job, my colleagues and even the very place I worked. Yet it was killing me. Everything was killing me. I was trying so very desperately to just be “normal” — to be functional, like all the people around me. But I couldn’t do it, no matter how hard I tried.

Two years into our relationship, my incredibly supportive and phenomenally patient partner said something I didn’t want to believe — he said I needed to quit my job and take care of my health. He said I needed to focus on healing and recovering. He told me I needed to find my “normal” – not society’s “normal.” It was a life-changing statement.

Finally, I left the job I loved. I was heartbroken at first, but the stress relief was tremendous. For months, I searched the internet for the “right” job — one that I could cope with. I couldn’t fathom not contributing financially to our relationship. After a few months of searching, he told me, quite simply, to stop it. He told me to listen to my body and my mind — to do what I felt I needed to do, without shame or guilt (and without so much as thinking about a potential job). He wanted me to take a break from the “real world” and just be me. But the truth was that I had lost touch with what my body “needed.” I had spent so long trying to force it into the mold I wanted it to be, that I didn’t even know who I really was anymore.

After weeks (maybe months) of feeling like a shattered, useless shell of a human — something changed. I started feeling a bit better. This is not to say I was suddenly “well” — not by a long shot. But the edge was taken off. I slowly began to understand that all the things I had agonized my way through weren’t pushing me closer to being functional, they were pushing me farther from it.

I had not been helping myself — I had been hurting myself.

After two years of working on this recovery, I had made improvements. With the help of medication, I could sleep decently most nights. I only needed one or two naps during the day, rather than sleeping the whole time. I could step outside the front door, and even be around other people for a short time, rather than hiding away from it all. Suddenly, I realized that I was smiling and laughing more often and more genuinely. So when I heard my partner refer to himself as my “caregiver,” my head seemed to explode.

After all, I could walk, talk, dress myself, feed myself — I didn’t needed a “caregiver!” The word had so much weight in my mind, perhaps in large part due to my lifelong attempts at proving how independent and capable I was. After all, if it wasn’t for me cleaning the house and doing the dishes and the laundry, we’d practically be living in a frat house.

Sure, he made the phone calls for me when my anxiety prevented me from doing so. Sure, he made excuses for us to escape family gatherings by running an errand so I could take a break. Sure, he would be the one to talk to my psychiatrist when I was too depressed to even open my mouth. Sure, he worked extremely hard during the day to provide for us, and extremely hard at all times to make me feel safe and loved. Sure, he kept me going mentally and physically when I couldn’t. But my “caregiver?”

Suddenly, in an unexpected moment, it clicked: “caregiver” didn’t mean what I always thought it meant. He was doing exactly that: He was caring for me in ways that I couldn’t care for myself.

That doesn’t mean I can’t do anything at all. It means I can’t do many of the things necessary for daily life. And you know what? That’s OK.

I tried; I tried so hard for so long that it almost killed me. I did everything humanly possible to function, and still it seemed I always “failed.” Repeatedly, I “failed” at the most basic human task: living. I had been so willing to try every lifestyle change and medication possible to help me live, yet I was so oblivious to the concept that I needed another person to help me do that.

So often, the word “stigma” is used to describe things which have a negative connotation, and finally, I understood that even seemingly innocuous words like “caregiver” could have a stigma too. I wasn’t useless, or invaluable, or a failure. I simply needed help.

For what seemed like eternity, I thought that with the right medication or therapy, I could find the help I needed. And while they are valuable tools, the true help I needed was a person. A person who understands what my limits are, and how best to assist me. A person who accepts me for exactly who I am, flaws and all. Someone who cares without judgment — and with unconditional love.

So often, we let feelings of shame, guilt or fear cloud our minds and keep us from accepting the help we need. We can let our own pride get in the way of understanding that we can’t do it alone. But when we step out of those things, we might see what is truly best for us.

I found out I needed a caregiver. It was a revelation that I never expected. The stigma and stereotypes attached to that word weighed heavily for a long time. Still, it’s a blessing that I didn’t even know I needed. And every day, it’s getting a bit easier to accept this new reality.

I have a caregiver, and I’m learning to be OK with that. 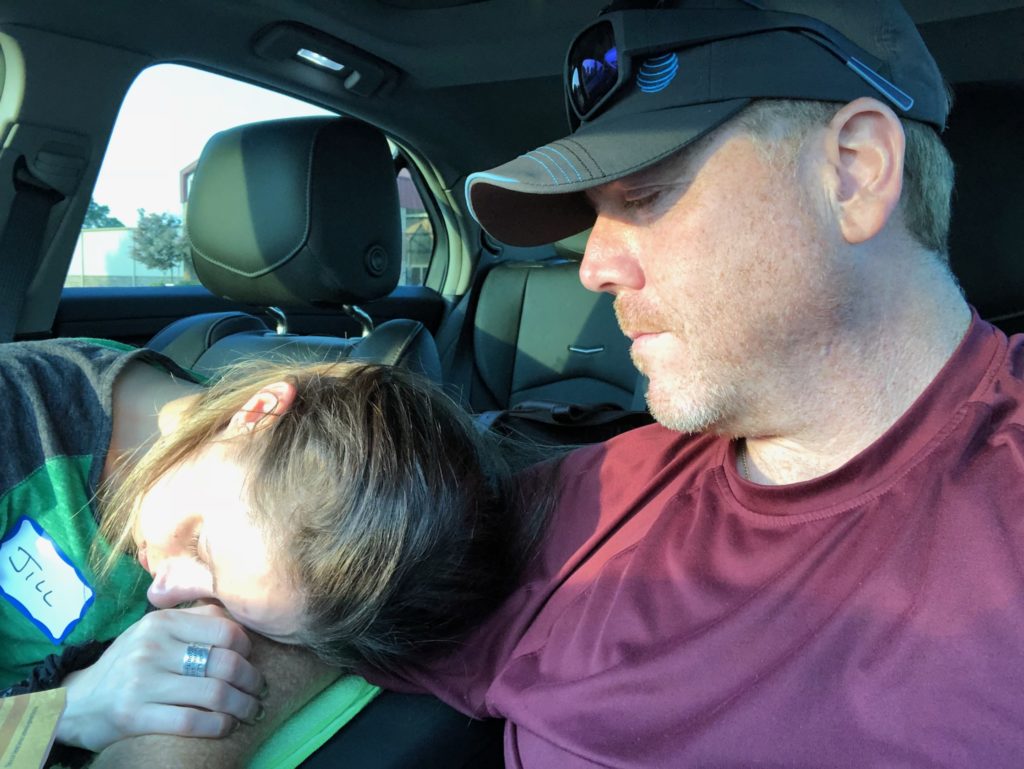 I still feel guilty for all the work he does for me. I still feel lazy, useless and broken at times. Still, he never lets me forget that he doesn’t see me that way. He has seen the worst of me, and yet still sees the best in me.

I am a 33-year-old woman who appears to the outside world as a happy, hard-working, smart, funny, capable person. Despite the façade of a “high-functioning” person — I have a caregiver.

I thank God every day that I finally found the help I have unknowingly needed my whole life.

Hockey Obsessed Introvert. Native Texan (Tornado Alley Veteran) J’essaie d’apprendre le français par moi-même. Refractory depression, severe anxiety, seizures, fibromyalgia, and others. I aim to make everyone’s life better, even for a moment - through patience, thoughtfulness, compassion, and genuine love. If my darkest hours and hard lessons can reach even one person, it was worth it. ⭐Brown ⭐Tatum⭐Hadden My friends, family, and doctors do God’s work. They are my greatest blessing. I owe them everything. I owe them my life. ❤ I’m a work in progress, but I do my best. ❤

Save
Conversations 23
We use cookies and related technologies to help identify you and your devices, enhance your experience and conduct advertising and analysis. By choosing "Accept", or by using this site, you are agreeing to our use of cookies. You can read more about how The Mighty uses cookies in our Cookie Notice.
Manage Choices
Accept