The Pain of Scrolling Through Social Media After a Mass Shooting

The worst time to be a person with a mental illness is in the wake of a mass shooting. After two such incidents in the United States in a matter of days, one in Atlanta and one in Boulder, Colorado, I can attest how painful it is to scroll through social media and witness the singling out of people like me. Like many of my peers with mental illness, I have no criminal history. I am a vegetarian, someone who wouldn’t even harm an animal, much less a human person.

Yet, whenever mass shootings befall the United States, many people’s knee jerk reaction is to blame those individuals “over there” — the “crazy people,” as one Facebook friend derided us. In a stigmatizing post that was shared 536 times in three hours before it appeared on my newsfeed, this “friend” proclaimed as follows: “If you think making it harder for crazy people to get a gun infringes on your rights to own a gun then you’re already admitting you’re too crazy to own one.” 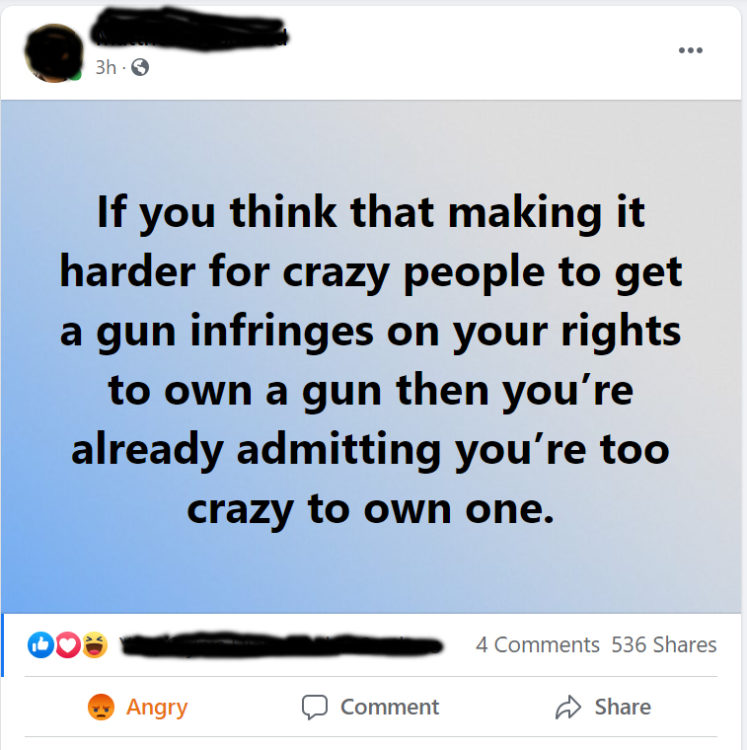 Bracketing reasoning that is so tautological as to almost be nonsensical, the post seems to be arguing that only “crazy people” themselves could be opposed to infringing on their right to gun ownership. A pejorative referring to individuals with mental illness, the term “crazy people” dismisses the lived realities of the 51.5 million Americans with mental health conditions, which amounts to nearly 20 percent of all U.S. adults. But, 20 percent of the population isn’t perpetrating mass shootings, and the vast majority of those committing such crimes are men, though more women than men are treated each year for mental illness.

Even if we limit the scope of our discussion to the four percent of people with “severe” mental health conditions, such as schizophrenia and bipolar disorder, only three to five percent of violent acts can be attributed to these individuals. In fact, those in question are in excess of ten times more likely the victims of violent crime rather than the perpetrators.

As anyone who performs a casual Google search can attest, there is no causal relationship between mental illness and mass shootings or even between these conditions and violent behavior. So, why the societal preoccupation with blaming a group that is marginalized to begin with for mass shootings? The answer, in my view, lies in the concept of “the other,” which is often referenced in phenomenological discourse. It is simply easier to pigeonhole as violent “those crazy people over there,” who are by definition not like the rest of us, than to wrestle with the reality that “sane” people can snap, that everyone has the capacity to do great harm, that quotidian circumstances are capable of producing loathsome acts.

Instead of curtailing the gun rights of individuals with mental illness based on the canard that we are violent, a better solution is for the United States to fund research into the causes of mass shootings. Only then shall we better understand how to combat this public health problem in a way that is evidence-based and scapegoats no one. For starters, the fruits of such research should finally end the targeting of people with mental illness as a group for the crime of having a condition that we didn’t choose. Simply put, we do not deserve to endure emotional Hell each time a mass shooting occurs.

Photo by Stewart MacLean on Unsplash

leslieazukor
Want more of The Mighty?
You can find even more stories on our Home page. There, you’ll also find thoughts and questions by our community.
Take Me Home