I never thought I would ever publicly share this part of my story. The majority of my therapy, anxiety, depression, etc. center around this. It’s by far the most vulnerable thing I’ve ever shared. However, it’s a huge part of my story. It’s something that made me feel wrong, embarrassed, broken and stupid. Even unworthy of having a daughter of my own. It wasn’t something I could find others blogging or talking about, so I thought I was alone. For about 10 years. The scarier part was when I would Google my symptoms, there wasn’t much about it. Which made me feel even more alone.

So what the heck am I talking about? Well I’m talking about something more women than you’d think deal with, but don’t talk about. Because the idea of it is kind of embarrassing and not an easy topic to bring up. It does make it uncomfortable to share because it’s about the female anatomy. So yeah this post will be talking about vaginas, hoohas or whatever ya wanna call them!

However, I’m sharing this with you because I wish I had a blog post like this pop up on my Google search when I felt so alone. That something is vaginismus. I was officially diagnosed with psychological vaginismus a few years ago. I didn’t have a name for it for 10 years, which made it even scarier.

So what is vaginismus? It’s involuntary contractions of your pelvic floor (PC) muscles, which are the muscles that surround a women’s vagina. “The PC muscles constrict and tighten the vaginal opening making it uncomfortable or in many cases virtually impossible to have entry,” according to vaginismus.com. Whether that “entry” be from a tampon, pelvic exam tool or sexual penetration. It’s different for each person.

Before I was diagnosed, I definitely thought it was because something was physically “wrong” with me. This is a huge reason why I didn’t seek help. I avoided going to the gynecologist until I was 24. Yes, you read that age right. This avoidance is common for people who have vaginismus. This is part of the reason why people who struggle with vaginismus also experience infertility. They avoid seeking help, treatment and answers.

I think part of that is because they feel so alone and isolated because it’s not talked about. At least, that was the case for me. I didn’t see a doctor about it until right before my husband and I wanted to start trying to have kids. The only reason why I scheduled an appointment was because I really wanted to see if I could get pregnant. I had believed for so long that I wouldn’t be able to.

I’m not going to dive into the specific details of my story because it’s a big step for me to even be sharing this in the first place. I wrote this because I remember how I felt before I was diagnosed. It was terrifying and isolating. I felt like something was terribly wrong with me and no one would be able to understand. However, those feelings changed once I was diagnosed and given a treatment plan. Luckily, the first doctor I saw about it knew exactly what it was and made me feel like I wasn’t alone or a weirdo. I know that’s not the case for all. The reason I got so lucky was because my therapist was the one who recommended her to me.

So if you are struggling with this, I would search specifically for a doctor/gynecologist who works with patients with vaginismus. If you live by me, reach out and I’ll give you my doctors information! She is truly an angel sent from above and happened to be the doctor on call to deliver Charlie. Which was definitely a full circle experience! I’m hoping she’s the one on call for my daughter as well.

The treatment plan for me was life-changing and was actually one of the most amazing experiences of my life. I think part of the reason behind that was because I had thought that there was no way I could be “fixed.” That’s not the case whatsoever! My doctor gave me a specific program to use which I am happy to recommend to anyone. Feel free to message me about it. I’ve gone through the program twice now! Although, I would suggest seeing your doctor first and ask to make sure it’s a good fit for you too.

This treatment was the first time in my life where I felt like a program was specifically made for me. I learned so much about vaginismus in general and also about myself. I learned why I lived with vaginismus and how I could overcome it. The private forum that was provided through the treatment program is a group of women going through the vaginismus program or who have gone through it already. It’s a safe place to ask questions and share stories. It was what I was looking for all those years. The reason why I couldn’t find it was because it was private because not many people are open to talk about this. However, I’m being open right now to let you know about this safe place. I wish my 13 year-old self had this safe place for her loneliness and fears.

For 10 years, I believed and told myself that something was wrong with me as a woman. It was my body’s way of telling me I could never get pregnant. I accepted those thoughts for a long time and it was painful because I’ve always wanted to be a mom. I knew that there were other ways to be able to be a mom such as adoption or surrogacy, which made those thoughts a little easier to push away. I didn’t know this was something many women struggle with and could be treated for.

It wasn’t until last year where I really took a step even deeper into the negative thoughts that my vaginismus engrained in me. I had gone through the program in 2018, but didn’t fully talk about it openly with my therapist until 2020. The main realization was that I was terrified to ever have a daughter of my own. I felt like I didn’t deserve to have a daughter. Because the one thing that I felt made me a woman, felt broken. I felt like I could never teach her how to be a woman because at times I felt like I didn’t know how to be one myself. Thanks to therapy, I was able to overcome these feelings and thoughts. A few months after this, I became pregnant with my daughter. 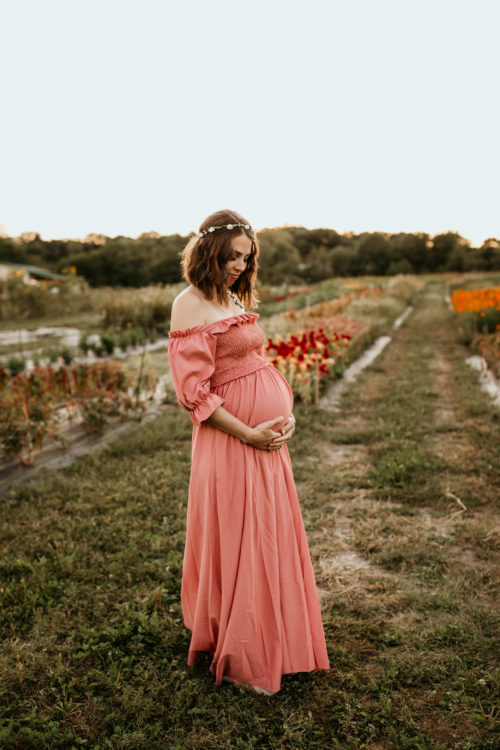 I am sharing this for the people who may be struggling to get pregnant, use a tampon, have a successful gynecologist visit, have sex, or who may have a similar story to mine. Infertility is also quite common for those who have vaginismus. However, it’s not commonly brought up.

I told myself I would share my story if I ever had my own daughter and if I was ready to share. I want her to grow up in a world where she can be honest and know that no matter what, she will never be a woman who is broken. I want her to be able to ask those uncomfortable questions I was too scared to ask. I want her to know that she is deserving. She is understood. She is loved. She is seen.

I struggle from anxiety and depression. One of the ways I cope with it is by writing about it! I’m a mental health blogger and you can find more of my writing at www.breathewithme.me I’m also a children’s author and my book “Are My Thoughts As Big As They Say?” is about a little boy with anxiety. You can order a copy at www.kristinacherep.com

kristinacherep
Want more of The Mighty?
You can find even more stories on our Home page. There, you’ll also find thoughts and questions by our community.
Take Me Home