March 2nd: Remission Day — the last of my “cancerversaries.”

It’s been a year since I made the switch from patient to survivor. While I use “survivor” as a noun (mainly since it’s a lot easier to say that than, “I had cancer last year, but now I am in remission”), I never say “I survived cancer.” The past tense is too final for me. Instead, l am surviving.

Choosing to find the positive, even when you’re not feeling it.

A big tenet in how I approached life before cancer was to maintain a positive mindset. I even hosted weekly meetings at school to share out great moments from our week. When I was given a cancer diagnosis, I decided to do the same. Nurse Jenn even noted it in a card she gave me at the end of chemo writing, “You were handed a tough regimen but you were always positive and even when vomiting you were laughing and making a joke.”

Becoming a survivor was a new and equally trying experience. Some days, I was really down in the dumps about how overwhelmed I was feeling about balancing going back to work and also understanding what I had just faced. A few months into remission, I remember actually thinking that having cancer was easier than facing life. Immediately, I was horrified by this thought and examined why it had occurred to me. The answer was obvious  — while I was feeling crappy, I got to lie around and watch movies all day and had no responsibility. I took that notion and turned it around. Lying around gets old after a few days; I now had the control and power to make my own choices and choose to do what I wanted. Finding my negative thoughts and turning them into positives is something that has helped me keep my spirits up as I continue through this journey.

Recognizing the physical healing is far easier than the emotional.

My physical healing was more or less complete by the six-month mark post-chemo. Very few side effects lingered by then, and my only remaining one is my aversion to plain water. However, the emotional healing had just begun and continues to this day.

Cancer sucks, and recognizing that is a crucial part of the healing process. The outside can be repaired, but the inside takes more work in my opinion. It’s OK and normal. Keep working at it and know that you’ll make progress.

Making a commitment to fitness and healthy eating. 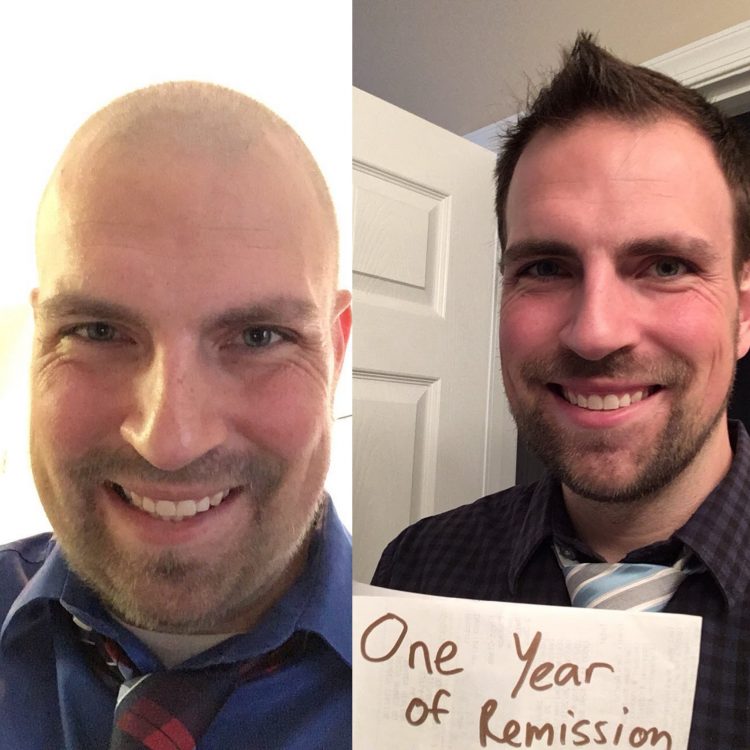 While physically healing is easier, getting back into shape takes work and effort. I was into fitness in college but dropped the ball once I became a real adult. On chemo, I gained 10 pounds…and a honeymoon in Hawaii only added to that. By August 2017, I was at my heaviest I’ve ever been — 215 pounds. At nearly six-feet-tall, this is teetering on overweight (and it was definitely not muscle mass that made up the weight). Similar to my approach to my mental health, I knew I had to take control of the situation and make changes. I started shifting to a healthier diet and increasing my activity level. By cooking more whole foods and working out for 30 minutes a few times a week, I’ve shed nearly 40 pounds since August.

Co-workers had commented that I’ve definitely lost weight and look good. My goal isn’t to just be physically where I was before cancer…I want to be better. I’m grabbing life by the ball(s) and making that happen.

Admitting that your mental health just isn’t OK and you need help.

It’s equally critical to realize that asking for help about mental health is just as important. In December, I went on anti-depressants to help combat feelings of depression. I was feeling down and needed help. This was the first time I truly felt brave in my journey. I admitted to myself, and others, that I needed help and made it happen.

And following up when that help wasn’t enough.

Even though I started on the medicine prescribed to me for my depression, initially, it didn’t help much. I had to advocate for myself and ask for a higher dose. The doctors agreed, and by late February, I felt tremendously better and continue to do so. Admitting that you need help is the first step — following up on that is equally important.

Proving that you have overcome chemo brain and don’t want to waste your brain power.

The loss of my mental capabilities due to chemo brain bothered me a lot, and I was determined to get them back. I eased my way into it, with reading shorter books and working my way up to longer ones. Last night, I finished 11/22/63, an 850-page Stephen King novel. I highly recommend the book to anyone who likes books about time travel, history, or the JFK assassination. But finishing the book represented more to me than just the bragging rights that come along with completing such a long book; this ridiculously thick book was given to me during chemo and it seemed like an impossible challenge then. Now, I’ve surpassed that seemingly-impossible challenge (in less than six days) and I’m ready to start on the next book.
Prior to cancer, most of my evenings were spent watching movies, playing video games, and endlessly scrolling through social media. Now, you can catch me reading, playing with Rubik’s Cubes (current record is just over one minute), and writing. I know what it’s like to truly veg out (not by choice), and I don’t want to waste that time anymore.

Setting goals, meeting them, and making new ones.

This ties in with the previous points about physical and mental healing. I constantly set fitness and reading goals and work to surpass them. At first, I wanted to run a mile in under 10 minutes. When I met that, I wanted to do under nine minutes. Then, I added distance to my goal.

A cancer patient’s main goal is to beat cancer. Keeping that attitude after being given the all clear is important and makes sure you’re making the best of life.

Using your journey as a springboard for something more.

From the beginning, I’ve been sharing my story openly and honestly. I feel that it would be a wasted opportunity to not continue to use my journey as a talking point in a larger narrative about men’s health, and more recently, mental health. I know my journey has prompted other men to take their health more seriously, and that’s an amazing feeling.

If you’re facing cancer, share your story (if you’re comfortable) before, during, and after. It’s cathartic and will help others. If you need support, come check out the monthly App Chat on the Stupid Cancer app on the second Tuesday of the month at 8:00 PM EST. I hear the moderator is a pretty ballsy guy. (Spoiler — it’s me.)

Finding out who and what deserves your time.

I did an entire post on this over the summer (and a larger piece about friendships in the fall), but it’s among the most important lessons I learned as a survivor. Not everyone and everything is deserving of your time.

I spend way more time with the people (and pets) around me than I did before. On my educational blog in December, I shared about how writing about education just wasn’t something I was passionate about anymore, so I shifted it to the back burner (and then proceeded to write a post like a month later – way to go, Mr. B).

You need to figure out what matters to you and focus in on that. It may sound selfish, but I don’t think it is. Ultimately, your life is for you to enjoy to the fullest extent possible.

Knowing you can genuinely say that you have a second shot at life.

At the end of the day, never forget that you stared death in the face, which is a super uplifting way to end a blog post! Most of the world doesn’t have that experience, but you know what it’s truly like to claw your way back from the other side.

You have a second shot at life — don’t waste it. These are my thoughts on the matter and what it means to truly be surviving. I’ve made some dramatic shifts in my life in the past year and have no intention of looking back.

So in a way, cancer, while you did take Lefty from me, you did do some good in my life. However, I’m still here a year later and you’re not. I guess we know who truly had the will to survive.

Author’s Note: I wasn’t originally planning to even write a blog post about this. When I began drafting an Instagram post, I realized that I’d be remiss if I didn’t include this milestone. 1,500 words later, I realized I had more to say than an Insta-caption could cover.

A version of this story originally appeared on aballsysenseoftumor.com.