A lot has happened in that time and the words spoken to me by a psychiatric nurse in the clinic — “Nothing will ever be the same again” — have turned out to be true.

And also, not true.

In case you’re not the kind of person to read long self-indulgent posts, the short summary is: I think I’m doing really well. Really, really well. I don’t always get it right, but when shit hits the fan, I’m making better choices more often than not.

To genuinely desire to be dead is a sign you’re sick. I think people who’ve never been that mentally unwell don’t realize what it means. It’s not sadness or a sense of what’s-the-fucking-point. It’s a physical and mental malaise not easily lifted by lifestyle change or sporadic visits to a psychologist.

Perhaps there were things I could have done differently. In fact, I’m sure there are. But I’d never been in that place before and I was lost. So consequences became consequences and here we are now – six months later.

I can’t explain how physically unwell I was at the time of my admission. I wasn’t bleeding or vomiting or having any of my other bodily functions misbehaving, but I was unwell. So unwell that I lost weeks of my life — before and after — when I was just burrowing down and trying to breathe. Everything else was too hard — walking, talking, brushing my teeth or trying to sleep.

I cried as I drove home — familiar bridges, mountains, streets and rivers I thought I’d never see again. Because the coronavirus (COVID-19) pandemic hit and sent everyone into the early stages of a nervous breakdown, I had two weeks of self-isolation at home. I’m so grateful for that quarantine. I was barely functioning and completely exhausted. In hindsight, I needed more than two weeks locked in with my husband. I needed two months. My energy levels were still dismal.

My ability to cry spontaneously was magnificent.

And my relationships with friends and family were new and strange. Unsure and faltering. It seemed I had a flashing neon sign on my head and I was fucking everything up whenever I opened my mouth. I couldn’t explain what I’d been through or how I felt. Despite verbosity on paper, I was lost for words in person.

I was diagnosed with bipolar II disorder, which felt “right.” Then that diagnosis was rescinded and I was given a diagnosis of borderline personality disorder (BPD). It doesn’t feel at all right. Now I wonder if I was so critically sleep-deprived that it completely dissolved my ability to function. I think sleep deprivation can do that. Factor in my complex childhood, hypersensitivity and a sprinkle of post-traumatic stress disorder (PTSD) and perhaps that’s my melting-pot diagnosis. At the end of the day, the labels don’t really matter. What matters is picking yourself up and moving on.

Most people didn’t talk about what I did or where I’d been — they just welcomed me back and started a new conversation, leaving the elephant all by itself in the corner of the room. Now everything is getting easier — the past is relegated to the past and it’s time to look towards the future. That’s certainly the impression I’m gaining from friends. I’m grateful for that. But I also feel labeled as someone who sank too low and there’s a sense of just waiting for it to happen again.

Well — I don’t believe it will happen again. I’ve had a lot of issues to work through — some new, some old. And despite appearances to the contrary, I’m working hard. I’ve collected a lot of problems in the last five years and they don’t resolve in a flash. It’s like a kitten playing with a basketful of wool — it’s a god-awful tangled mess. But I’m nothing if not patient and determined. Strand by strand, I’m detangling things.

A few weeks ago, I had my first — and hopefully last — relapse. Anxiety — a little ball of knots permanently ensconced in my belly — overwhelmed me and I slipped back into self-harm and eating disorder habits. It lasted two days. Just a couple of days before I said, no. I don’t ever want to do this again. And I threw away all my hastily purchased tools of the trade. Then I felt a little brain snap — one similar to the snap from five years ago that sent me tunneling down this rabbit hole. But this time, I feel like I snapped back. That I’m getting out of the rabbit hole. I suddenly want the “life worth living,” we talk about in dialectical behavior therapy (DBT) all the time.

I recently came away from a self-imposed writing retreat for one. I was afraid old patterns would be irrepressible but I surprised myself. I ate on schedule, sent myself to bed, showered myself, worked really hard and cried without repercussions. I almost feel “normal” today.

Suddenly wanting something and achieving it isn’t always the same thing. I can suddenly want to be fitter but it won’t happen overnight. It takes months and years of commitment and change before the goal is achieved. But I feel like that’s where I am. It took me five years to sink to the bottom of my rabbit hole. I’m sincerely hoping the exit is a lot speedier.

I know I’ve written equally optimistic posts in the past, then tripped over and face-planted on the concrete but honestly, this time feels very different. I have felt a distinct change and I’m getting off this hamster wheel. When the speed bumps get in my way, I’m gonna keep on keeping on.

Photo by Lili Kovac on Unsplash 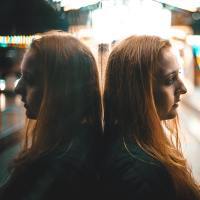