How Job Loss Affected My Physical and Mental Health

If I had one wish this year, it would be that everyone who wants and needs a job gets one.

I might throw myself in there, too. Being let go from a job, from COVID-related reasons — or any other for that matter — really sucks. I know.

You see, two and a half years ago, I got fired from a job I loved. And it started a downward emotional spiral from which I am just now recovering.

Make no mistake, I deserved it, in their eyes. I had a boss I didn’t click with, and rather than go to Human Resources, as I had been instructed, I asked co-workers and other managers how to deal with this personality conflict. My boss had left me in tears after many conversations, and my confidence was shot. I wasn’t thinking clearly.

I did not realize how mad and embarrassed that would make my boss. The president of the company called me in and read me the riot act, complete with a “two strike against you” warning.

I didn’t grovel, but I indicated that I was devoted to his company. Then I did what anyone in my position would do: I started looking for other jobs. And I found one I thought was perfect for me. And that’s where my story really begins.

You see, I didn’t realize it at the time, but I was suffering a bad staph infection from some skin cancer surgery that went awry. And the hiring manager of the job I was pursuing had the same first name as my current boss. Be careful with emails. 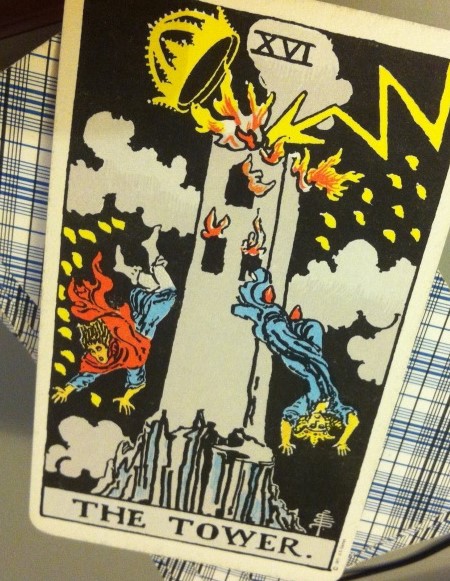 Everyone said it was a blessing in disguise; I wasn’t happy there, that I didn’t need to take his behavior anymore. But the blow to my confidence and the reason I got fired was my “Tower Moment.” If anyone is familiar with Tarot cards, the Tower is the card that knocks down everything in your life and indicates you will be building yourself back up from the ground. Well, I felt I was submerged. I was sick, depressed, humiliated and just very sad.

So I did what you probably shouldn’t do: I took the first job that was offered – and no, it wasn’t that job of my dreams. I didn’t even make the interview cut there. The job I accepted was a technical editing job that paid six figures, and a good friend who worked there paved the way for me to land it. I knew within three months it was not right for me and told them so. I cried every morning on my way to work, which incidentally took over an hour. My drive home was double that.

The boss I worked for was great, allowing me to change my hours and even work from home until they found a replacement. But the damage had been done. The desire to show my old job who was boss, as well as collect a bunch of money for my family, pushed me further than I was able to go. I began to have panic attacks on my commute, and call my adult daughter in tears and fear. My anxiety was over the top. I couldn’t eat, I suffered terrible insomnia and my doctor was forced to increase my anti-anxiety medication and futz with my antidepressants. Finally I had what was called a “major depressive disorder,” which I think is a nice way to say I had a nervous breakdown.

I went out on disability, but that’s when things got really bleak. I was supposed to rest, but my mom lost her 93-year-old boyfriend and 94-year-old brother within three days of each other. I had to be there for her. The shock of their deaths pushed her into dementia that was diagnosed as Alzheimer’s. She lives up in Chico, but I jumped in to help out my sister, who had the bulk of my mom’s care. Then I had an unexpected hysterectomy. I spent most of the early summer recovering. When I tried to go back to work with a simple part-time writing gig, I fell apart again. I went back on disability.

Then my cousin and childhood best friend contracted cancer (lymphoma) and my mom was diagnosed with COPD. My mom survived – my cousin, just 56, didn’t. I was devastated.

The day he died I had an interview for a full-time job at a weekly newspaper for a retirement community. How hard could it be? Well, I was about to find out. To my surprise, I was hired.

I started in January, full-throttle. I had a steep learning curve with some of the technology, and two unexpected root canals that kept me from performing my best. Then COVID-19 struck, and I was out of the office for five weeks. (Newspapers are considered essential businesses.) When I returned, I was presented with a “performance plan” to improve my work, which seemed a bit contrary to me since I couldn’t be in the office to DO all my job duties.

My anxiety ratcheted up, and one morning I had to pull over to the side of the road due to a panic attack. I called my doctor to tell him I think I was heading not toward work but to another major depressive disorder. But I aced my performance plan anyway. Then my boss had a surprise for me – part two of the performance plan, which would have required additional regular weekend work and even more tasks to ace. I called my husband, explained the situation, and he answered in a way I will never forget and always appreciate: “Oh, Hell no!”

I gave my notice that day, with a long enough leeway to find a replacement. My boss cooperated graciously, as my responsibilities to my mom were increasing. But my body didn’t. This time, it was severe stomach cramps and something I will gently call “GI issues.” I was nauseous and had severe stomach pains within two weeks. One night my husband rushed me to the emergency room where they found signs of ulcers and other issues. I was immediately taken off work, and my husband and I moved my stuff out of my office after I was released from the hospital. I called my boss to tell her what was going on. I haven’t heard from her since.

By the end of August, I had my answer to my tummy troubles: They were stress related. Well, duh!

I was an emotional mess, too. The last two years, three jobs and freelancing had sapped my confidence, my health and my emotional stability. Caring for my mom alongside my sister was tough. And COVID fears were taking their toll on me. My doctor said I was unable to work, and I agreed. But rather than throw medications at me, he had me try Dialectical Behavioral Therapy (DBT) and other self-care practices, like taking an anxiety skills class and practicing yoga.

Then in September I had a stupid fall and got a concussion; I had to put some of those things on hold. Then in October, I got COVID. In November I fell – walking my dogs, don’t laugh again – and re-aggravated my concussion. Only by Thanksgiving did I start to feel better physically. And I forced myself to think about myself and the last two and a half years more positively.

Then my doctor and I tried some new medication. And a sleep apnea mask took care of my insomnia. And I became addicted to my yoga practice.

To my surprise, one day a few weeks ago, I announced to myself: I feel better.

This whole story is not to regale you with my litany of health issues but to shown how my health was affected by what was going on in my life, and vice versa. Every time my mind told me to push on, my body and brain pushed back. I haven’t properly grieved deaths, or my mom’s illness. And I also didn’t grieve the fact that my own actions led to being fired from a job I thought I loved. But I’m starting to forgive myself about that and feel less guilty about the co-workers I left in a lurch when I went on disability. Guilt is useless, and I was sick. Legitimately ill. Because mental and emotional issues are just as bad as the flu. And in my experience, worse than COVID.

Lately I realized how little I have been thinking about those past three jobs, and what I considered those past three failures. In fact, I’m tossing them out. My Tower moment has made me recreate my life in a healthier, more productive and certainly more optimistic way.

But I am still unemployed. Soon I will run out of my savings, and may need to dip into a 401K. It won’t last long. But at least I have it. There are families who don’t know if they can pay their December electricity bills. Or, God forbid, feed their children.

But a Tower Moment gives way to the Star, a time of renewal and hope. I got mine.

And that’s all I want for people this holiday season.

Peggy Spear
•
Follow
peggyspear13
Want more of The Mighty?
You can find even more stories on our Home page. There, you’ll also find thoughts and questions by our community.
Take Me Home