Ten years ago on my very first day of medical school, I experienced an episode of vasovagal syncope (fainting), hitting my head on a door and slamming my chin into the floor. This caused me to knock my front tooth out of place and split my lip open. We hadn’t even started rounding on our patients, I fainted as we were introducing ourselves.

I was admitted to the hospital for two days. The hospital I was assigned was 60 minutes from my apartment in Los Angeles. I was a newlywed and my husband and I moved across the country to attend different doctoral programs (An M.D. and a Ph.D.). We only had one vehicle, and that’s how I commuted to medical school. My husband had to get to the hospital via public transit (Metrolink train), and my new classmates whom I only met that day picked him up. I was grateful for the kindness of strangers. Then the hospital said he couldn’t stay overnight, but thankfully the head nurse set up a space on the cold hard floor for him to sleep.

My heart rate wouldn’t normalize and remained above 120 bpm, and I had a history of syncope or near syncopal episodes. They didn’t discharge me for two days and ordered an echocardiogram and tilt table test. This was before postural orthostatic tachycardia syndrome was really accepted and recognized as a true disorder. I was diagnosed with orthostatic hypotension; essentially, my blood pressure would drop when standing and the resultant decrease in blood flow to the brain would cause me to faint. 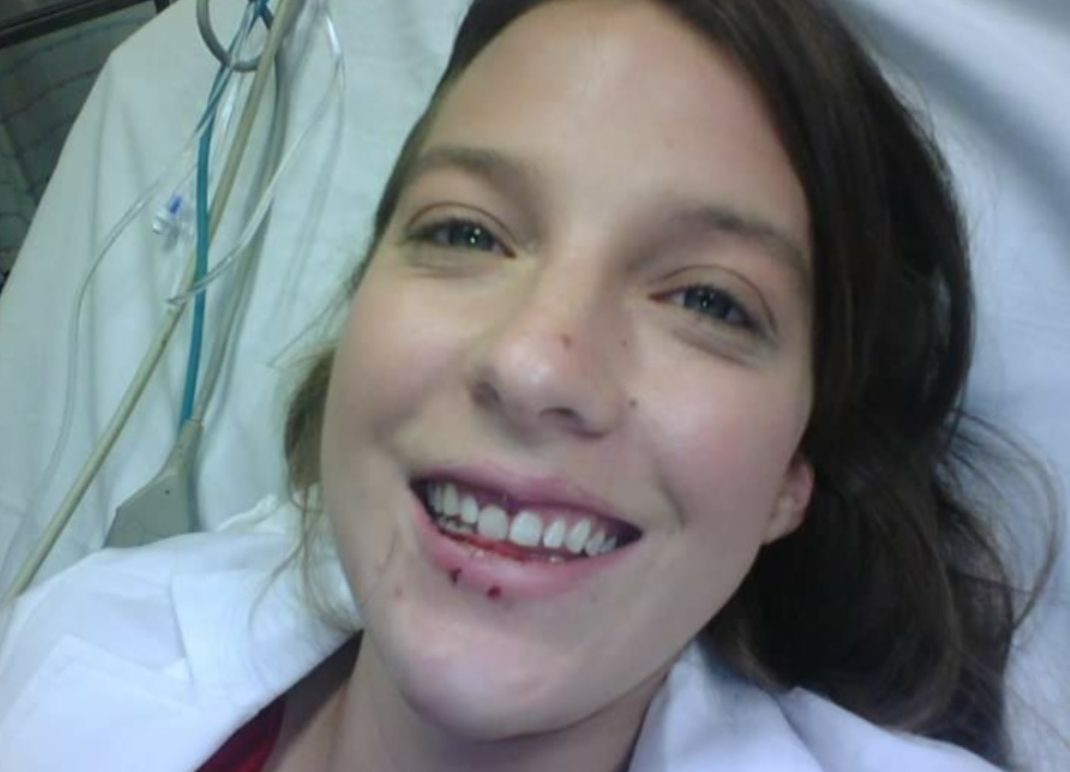 Now we know the incident was actually due to hyperadrenergic POTS. I wasn’t diagnosed correctly until nine years later. Hyperadrenergic means I produce an excess of adrenaline that causes me to be in a perpetual state of fight-or-flight, causing my rapid heart rate. When standing, my body releases even more adrenaline, causing my heart rate to increase further. High-stress situations, like my first day of medical school in an unfamiliar hospital and location, explain further increases in adrenaline which cause my heart rate and other symptoms related to a fight-or-flight response to be more severe.

The proposed treatment plan was to wear compression garments and increase my salt intake. I had to meet with administration due to needing to miss much of the two-week rotation to have my teeth fixed and to move closer. On meeting with administration, I was told, “You are going to have to figure out something to prevent this because nobody is going to take you seriously as a physician if you are unable to stand and be on your feet.” I guess paraplegics can’t be good physicians? Even more infuriating was that the administrator was a physician and had a chronic heart condition that sometimes caused him to cancel lectures at the last minute.

I had several other personal experiences of the ableism that infects medical training. When I started experiencing disabling pelvic pain alongside infertility, another administrator said, “I do not understand why you are so focused on infertility at your age. You are still very young. You should just freeze your eggs, and do IVF after completing your training.” As my health continued to decline, she eventually said she believed I wasn’t really sick and it was in my head because I didn’t really want to be a physician. She was a pediatrician herself, the field I was most interested in pursuing.

When I was doing my OB/Gyn rotation in my third year of medical school, I missed about a week near the end due to severe pelvic pain (which also came with nausea and vomiting). These absences had been excused by the school. However, when I asked my superiors to evaluate my performance and submit them, they refused. Their excuse was that I had missed too much time and they were unable to really evaluate me. Ironically, I missed those days due to a gynecological issue they treat on a regular basis, and was even scheduled for surgery the month following my rotation. I was diagnosed with endometriosis and suspected adenomyosis after laparoscopic excision surgery.

Unfortunately, my health continued to decline and I was forced to withdraw permanently from medical school. I am currently disabled from a rare triad of Ehlers-Danlos syndrome, mast cell activation disorder, and postural orthostatic tachycardia syndrome that also presents with severe gastroparesis and intestinal dysmotility as well as gastroesophageal reflux disorder.

Medicine perpetuates ableism. It is rare to find a physician who has personally experienced disability and chronic illness. This is due to the fact that the study of medicine is currently often not accessible to the disabled community. Due to this lack of inclusion, physicians are often unaware of or unwilling to acknowledge their own bias when treating disabled patients. The disabled community has no voice. Until this changes, too many people in the disabled community will suffer at the hands of those who took an oath to care for them.

Are you a medical professional with a disability?