You are a young adult, forming your identity in the world, and suddenly you become very sick — seemingly out of the blue.

You cannot eat or drink without becoming very nauseous and having extreme gastrointestinal (GI) pain, and sometimes you vomit for long periods of time.

Imagine that you have other pain as well. Your joints ache, and your shoulders, hips, knees, elbows, neck, back, fingers, toes, wrists, and ankles all dislocate or subluxate, causing debilitating pain.

Imagine that you cannot stand up without blacking out. You get the feeling of the world closing in on you whenever you move from sitting to standing, and walking any distance becomes a workout.

Imagine that you have allergy-like reactions to scents, soaps, materials, medications, and foods — sometimes seemingly for no reason. Allergy tests suggest you’re not allergic to whatever your body thinks is an enemy. You’re never sure what will cause a reaction and when it’ll happen.

Imagine that you are so fatigued that you can’t get out of bed for months. You aren’t just tired — you are deeply exhausted to the point where your bones hurt, your chest feels like cement, and your arms and legs feel as heavy as lead.

Imagine going to the emergency room for the tenth time in two months with all of these symptoms and being told doctors don’t know what’s wrong once again. No doctor you’ve seen knows why your symptoms are happening.

I’ve lived like this for almost 13 years without answers.

“Could it all be in your head?” doctors ask.

Now imagine trying to function in the world as a young adult with all of this happening inside of your body. You still have to work, but you can’t stay awake for a full shift, so you have to quit your job.

You haven’t been able to eat in weeks, and you faint regularly, so you can’t drive anywhere safely. You can have an allergic reaction or a vomiting spell anywhere you are — and at random — so you can’t socialize or leave your house without carrying around a bag.

You have to take so many medications to have a bowel movement that you can’t leave your toilet for longer than 15 minutes. You are dehydrated too, so you’re really grumpy and everything is hard. Life is hard.

This is my life with Ehlers-Danlos Syndrome (EDS).

Ehlers-Danlos Syndrome is a genetic condition that causes the body to make faulty collagen — the connective tissue that makes up our body’s structure. EDS can cause gastrointestinal disorders, like gastroparesis, colonic inertia, chronic constipation, gastroesophageal reflux disease (GERD), involuntary vomiting, paralysis of the esophagus, stomach, intestines, and colon, and distention and bloating.

EDS can also cause dysautonomia — dysregulation of the autonomic nervous system that can result in fainting, feeling dizzy, temperature dysregulation, chronic fatigue, exercise intolerance, and blood pooling in the lower legs. Some of the most common dysautonomia diagnoses are postural orthostatic tachycardia syndrome (POTS), orthostatic intolerance, and neurocardiogenic syncope.

EDS may cause mast cell activation syndrome too, which is when the mast cells in the body attack random substances as if you’re allergic to those things. This can cause anaphylaxis, rashes, trouble breathing, swelling, welts, hives, redness, facial flushing, tingling, and immune system responses. It may cause people to be hospitalized.

EDS can also cause many neurological conditions, including spinal tethering, which may cause weakness and tingling in the lower extremities as well as constipation and bladder incontinence. It can also cause Chiari malformation and craniocervical instability — often-painful conditions affecting the neck and skull. Ehlers-Danlos syndrome may involve cerebral spinal fluid leaks, which may cause painful migraines and headaches.

It’s no wonder patients with EDS sometimes develop eating disorders, such as anorexia or bulimia, as a result of these difficult symptoms.

Not only does an EDS patient often lose their healthy lifestyle and identity, but they also often are in agony and may be afraid to put anything in their mouth.

Personally, I never struggled with food before I became sick. I was able to eat and defecate just fine. I was even an athlete trying for the Olympics. But when I became ill, I lost my career as a skier, I lost my friends and teammates, I lost my identity as an athlete, and I lost the little joys in life because I felt so miserable all the time.

The stress of my EDS caused me to restrict my food intake during the day so I could be present with people and not be stuck hugging the toilet. At night, I would allow myself to eat whatever I wanted because I knew it was going to make me sick anyway, I missed food, and I was hungry.

I’ve been to inpatient and residential treatment centers for my eating disorder 13 times, but I’m not recovered yet.

So many patients with EDS are “repeat admissions” at eating disorder treatment centers because treatment often doesn’t work for those of us whose gastrointestinal systems are paralyzed. With the right care, though, many patients fully recover fully from their eating disorders — even if they have to be tube-fed.

Every single time I was discharged from eating disorder treatment, I relapsed because I was no longer being force-fed. I couldn’t tolerate increasing the pain I live with even more by forcing food into my body.

The treatment centers downplayed the role my EDS played in my eating disorder, saying I would no longer have GI issues once I was at a healthy weight. But that’s never been my experience. I’ve never gotten any relief from what treatment centers tell me to do. I got relief from switching from eating food to total parenteral nutrition (TPN), though.

Total parenteral nutrition is intravenous nutrition given through a port in the chest. It doesn’t use the GI system. My GI system is non-functioning, so this is how I am fed. It is an option for when your GI system is shut down. 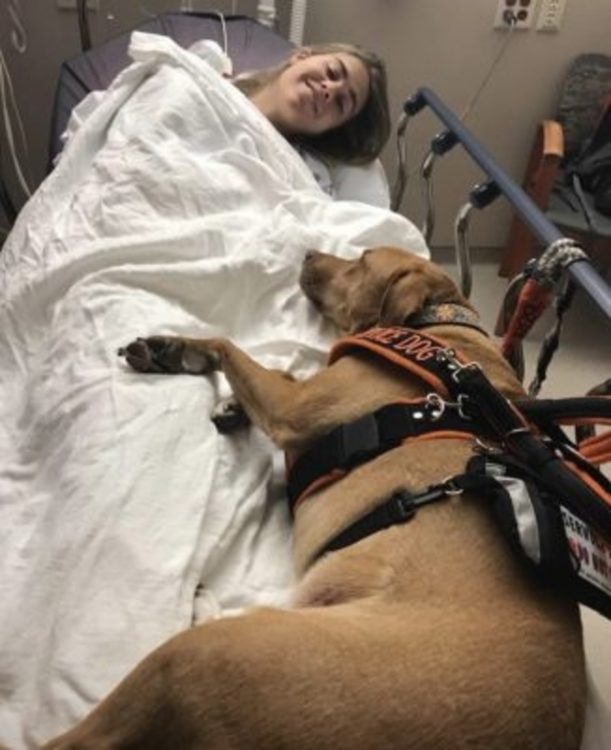 I’m not surprised I have an eating disorder with all of these symptoms. The gastrointestinal distress alone causes me to have a challenging relationship with food.

Most of my friends have EDS and are in recovery from eating disorders. We stay in touch because it’s healing to have a companion who truly understands what it’s like to live life with these conditions. I’m personally grateful for my friends who have EDS and are recovering from eating disorders because I don’t even have to say anything for them to know my struggles — and for me to know theirs. I just wish we all lived closer — after all, there are so few of us that we are spread around the world.

Some of us see our eating disorders improve when our gastrointestinal and EDS symptoms are tended to (usually with medications, feeding tubes, central lines, and ostomies). But many times, once the eating disorder has “set up camp,” it’s a beast to fight. After living in a state of starvation for so many years, it can be hard to know what is normal.

There are some amazing providers in the United States who specialize in EDS, and I am lucky to have one as a doctor. Many of these physicians have a genuine belief in their patients’ experiences.

When treatment centers would question my intentions around food and doubt my every symptom, these doctors actually listened to me and took my word as the truth. When my intestines were shutting down, I wasn’t blamed for it like I previously had been in eating disorder treatment. Instead, I was switched to a different form of nutrition that didn’t require my gut.

Being believed has made all the difference in my life. I still struggle with all the same symptoms, but I am not alone any longer. I have friends who understand me on a personal level, and I have doctors who relate to me both scientifically and from experience. I have help — real help. I wish that every person struggling with EDS and eating disorders could have help like this.

I struggle with many chronic conditions (physical and mental) that affect me every day. I have a service dog to help mitigate my disabilities. I have a small crocheted hat business and I train dogs on the side. Most of my days are filled with doctor's appointments and resting so I can go to all my appointments. I'm lucky to have such a supportive family and a few great friends.

adele-espy
Want more of The Mighty?
You can find even more stories on our Home page. There, you’ll also find thoughts and questions by our community.
Take Me Home