Join the Conversation on Miscarriage
2.1K people
0 stories
455 posts
Note: The hashtags you follow are publicly viewable on your profile; you can change this at any time.
What's New in Miscarriage
All
Stories
Posts
Videos

today marks four years since my miscarriage. i feel guilty for mourning it because it was a ridiculously complicated situation. i actually planned to abort. the father and i were not in a good relationship. i was only pregnant for a few short weeks, but so much happened inside of my head during that time.

i remember fast forwarding through our future in my imagination, and seeing how we would fall apart and never be a family. i imagined how this would affect our child and was afraid of the pain i would afflict on them. i also fast forwarded through the future of my child, and the one thing i could always picture us doing was swimming. i had fond memories of my mother teaching me to swim, so i pictured myself teaching my own child, surrounded by the comfort of undulating water and echos of children's voices ringing through some public pool in my imaginary future. i weighed these two imaginings and decided the first was more realistic. i couldn't bring a child into the toxicity that was my relationship. the second was a stupid fantasy, i thought.

my health at that time was really poor and i was still undiagnosed. in fact i found out that i was pregnant because my illness took me to the ER. i was admitted to the hospital and spent a week laying in bed agonizing over what i should do. i had also been using drugs and alcohol to cope with my medical issues, which of course only made them worse and was dangerous for the life that had been quietly forming inside of me. did i really want to pass on these genes?

the memories of that night are fragmented. it's mostly just nothingness infused with terror, and then there are a few moments that poke through, as if the memory-making part of my brain was coming up gasping for air in those moments. i haven't spoken about those moments to anyone, and usually not to myself either.

i put the memory away as soon as it happened so that i could move on. after playing and replaying the early life of my child, i now saw how dysfunctional my life had become and needed to make changes. i got out of that relationship and within a few months i took a better job in a city with better medical care.

most of the time it's almost like that night and what led up to it never happened. almost, but not quite. and every october it breaks through. there's still a little thread in the background that always tugs on me, love i could never give for the person who never got to live, never got to learn to swim, never got to feel the safety of mom's presence while kicking off for the first time. i even see a face, the same one i saw all those years ago when i would imagine us swimming. the face is from my imagination, yet it feels realer than the fragmented memories of what actually happened four years ago. and every october, grief over what could have been briefly eclipses what is.

given the complicated nature of what happened and who i was back then, i have never been comfortable admitting (even to myself) that what i felt was grief. i had no right to grieve. but emotions just are. they exist whether you think they should or not. and this one is grief. after four years, it finally has a name. i don't know what to do with it, but it has a name.#Grief #Miscarriage #PTSD

Grief of ending a wanted pregnancy

With the overturning of Roe Versus Wade, I felt compelled to interview women that have had abortions to open the conversation about these very individual and personal stories. I encourage you to listen to Kate's story with an open mind and an open heart, especially if you are against abortion.

Kate had a late-term abortion when she was 35 weeks pregnant due to severe medical issues and it being a very high-risk pregnancy putting Kate's life in danger. Kate's story is an emotional one but it's not an uncommon one. Kate shares the shock, grief, and fear she experienced when she learned her best option would be having an abortion for her very wanted and very loved baby. 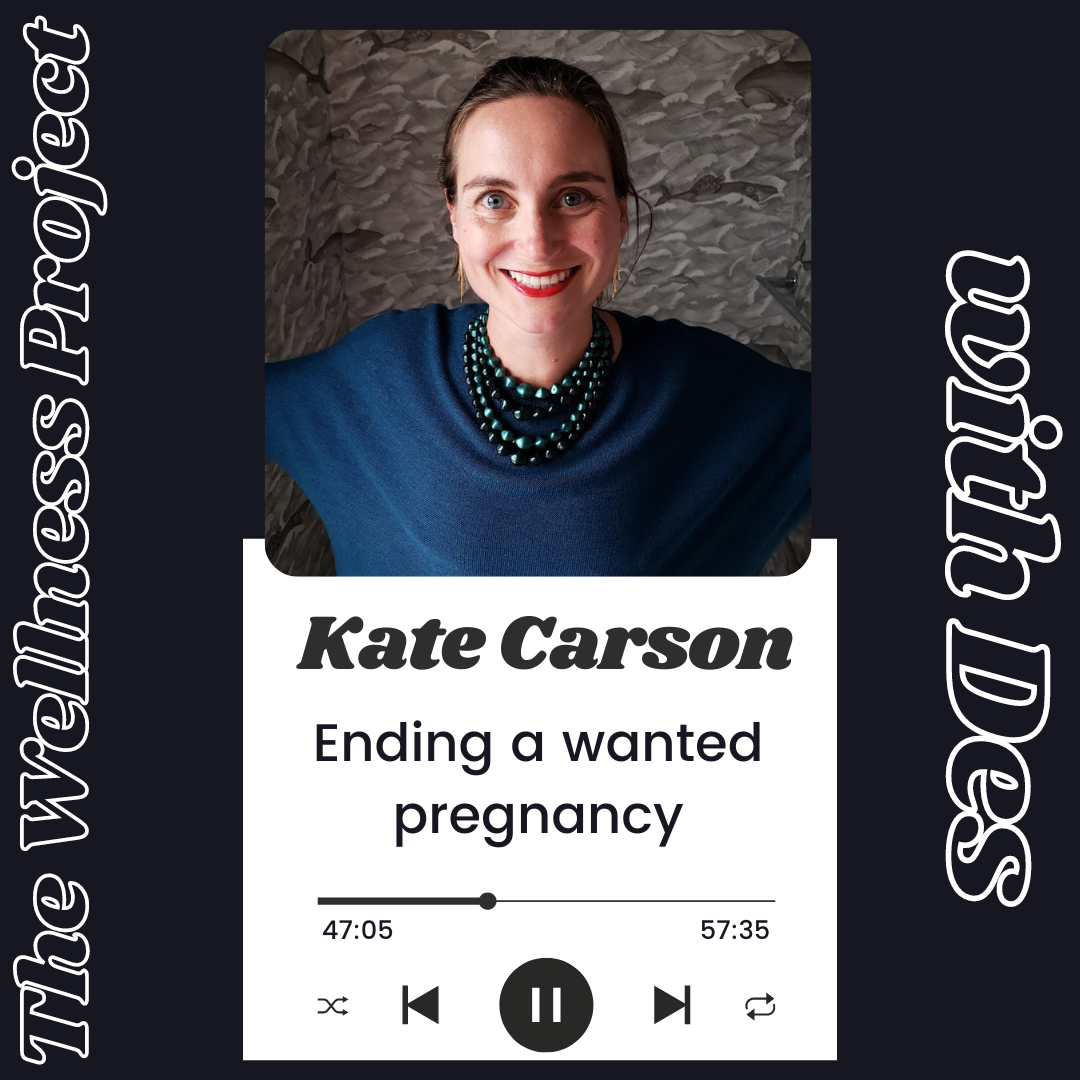 98. The Grief of choosing to end a wanted pregnancy - AccordingtoDes

Hello and welcome to my podcast, The Wellness Project with Des. In today’s episode, I speak with Kate Carson about her experience ending a wanted pregnancy. I’m Desiree, a Mental Health Therapist that is passionate about helping people improve their mental health and live a healthy and fulfilled life. One way I do this is by […]

The Unexpected Grief Triggers I Encountered After My Pregnancy Loss

NewJanuary 26, 2017. A day that will live in my memories forever because it’s the day I lost what would have been my third child. I woke up that morning and knew something was wrong, but it took several days of blood work and ultrasounds to confirm what I already knew in my heart — [...]

“I lost a baby. I was 14 when I didn’t give my first boyfriend consent….

I lost a baby. I was 14 when I didn’t give my first boyfriend consent. I was 10 when my cousin started repeatedly molesting me. I lost a friend to alcohol poisoning and was with him the night he died, this person would’ve been my brother in law. My mother was an alcoholic and has been verbally abusive, narcissistic, and victimizing herself my entire life. She told me she should’ve aborted me and that I’m the reason we marriage with my father didn’t work. My dad was never emotionally present, he didn’t know how to be. I practically raised myself. My ex boyfriend was controlling and verbally abusive and tore down every ounce of confidence or self esteem that I had left. I gained weight, I hated myself. I struggled with post partum depression after my son was born due to a traumatic birth. My anxiety was extreme after this. I was terrified of dropping him, I was terrified of connecting with him. I loved him but couldn’t touch him. My daughter, my sweet rainbow baby is physically delayed. She can’t walk, but she sure is making progress, we’ve been in physical therapy for the last 6 months, but it’s hard reading other parents posts about the milestones their child the same age have reached. She only ever wants me and is always fussy. Are these things supposed to make me stronger? It doesn’t feel that way. It feels like weights that constantly hold my ankles under water just enough for my nose to breathe, but I’m slowly drowning because I can’t hold them up anymore. After I lost my baby I was in a depressive psychosis and almost pulled the trigger, but I wanted to live I just didn’t know how. My husband saved me. He doesn’t deserve such a mess of a human and I’m trying so hard to not mess up my children, to not let my depression take ahold and make it so I don’t get out of bed, to not let my anxiety keep me from them having an amazing childhood and taking them places and doing things. Gosh, I’m falling apart today. So I’m trying to focus on things that help. Yesterday it was organizing and avoiding snapping at my children and honestly avoid them overstimulating me with laying all over me, instead having them help me. My five year old sure felt special helping mom. Today I’m still on the couch, but their bellies are full because I got up to feed them, brush their teeth, give them their gummy vitamins, and they’re watching their favorite movie. Looking for strength, looking for courage, trying to find that happy version of me that can still barely see above water. It’s days like today that I wish my husband would take the day off and just hold me while I cry. Until then I decided to share my story here and a share a glimpse of what I’m feeling because getting it out somehow is better than not at all. Thanks for listening/reading. #MentalHealth #Anxiety #Depression #ChildLoss #Miscarriage #SexualAssault #Surviving

Halsey Proves (As If We Didn't Know) Abortions Are Lifesaving

Ever since SCOTUS made their landmark (horrible, shitty, selfish, racist, ableist…the list goes on) decision to overturn Roe v. Wade, many celebrities and prominent figures have come out to speak about their experiences with abortion in relation to their health, and one of those figures is none other than Halsey. Halsey wrote an opinion piece [...]

Why Pregnancy Loss Should Be Covered Under Bereavement Leave

When I experienced a miscarriage during my third pregnancy in early 2017, asking for time off from work didn’t even cross my mind. I knew that pregnancy loss wasn’t covered under bereavement, and I technically wasn’t sick, so it seemed ridiculous to waste one of the five sick days I received each year on something [...]

NewThe moment I realized I was pregnant, I tried to dial my emotions down. I used the term “cautiously optimistic” because I wanted to make sure that I was not overly attached to my pregnancy in case I would become one in four people who miscarry. I only told a handful of friends and always [...]

Last fall marked seven years since I was told that I had miscarried my baby (with my ex-husband.) This was the the worst time of my life. At that point, I had never felt pain and loss like it. I struggled to be open up about how I was feeling as I was made to [...]

The Miscarriage That Never Ends

NewI have not written a blog since my surgery; I have journaled and that has helped, but that format is very different. I tried to write blogs multiple times, my phone is filled with incomplete sentences and ideas never followed up on; but, I have not been able to write about much in this setting [...]

TW// Pregnancy loss...................... As I mentioned earlier, I found out why I had been feeling so under the weather. On the 17th, I found out I was pregnant. I started lightly bleeding the night of the 22nd, went to a clinic the next day. Had weird bleeding on Christmas, then got my second test on the 28th which confirmed that I unfortunately lost the baby... It's been rough. Plus side, I haven't slept that much in years 😅 #Miscarriage #ChildLoss #Grief