Is Marijuana Permitted in Connecticut ?

Marijuana is legal for both recreational and medicinal purposes. Connecticut is late to the marijuana legalization debate. Massachusetts, New York, New Jersey, and Maine have all relaxed their marijuana laws far ahead of Connecticut.

Governor Malloy of Connecticut signed into law a medical marijuana programmed for his state in 2012.

To qualify for a medical marijuana card in Connecticut, patients must be 18 or older, or have a caregiver who can access cannabis if the patient is a minor or adult who cannot buy/grow for themselves.

Debilitating medical conditions in adults include:

Debilitating Medical Conditions for Patients Under the Age of 18 include:

Patients and caregivers who have registered may each have up to 5 ounces.

Beginning in October 2021, patients who use medical marijuana will be able to grow their own cannabis.

If a patient uses marijuana in a public setting, such as: A motor vehicle, a school bus, or another moving vehicle, the legislation does not apply.

2. While on the premises of any public or private school, dorm, college, or institution.

3. Within a marijuana dispensary.

Quick Steps to Get a Connecticut Medical Marijuana Card?

The Department of Consumer Protection is now in charge of the cannabis sales in the state according to SB 1201.

Schedule a consultation with My MMJ Doctor.

Complete the online form to schedule a consultation with My MMJ Doctor. We have a group of qualified medical professionals who specialize in medical marijuana.

Show up for the appointment.

A certified medical expert will establish a video conference with you at the time you specify after you submit the form to review your medical issues.

You must register with the DCP as soon as you receive the recommendation letter. Patients cannot access the online certification system until they have registered with the DAS Business Network.

Only Connecticut residents who meet the requirements are allowed to possess cannabis and purchase it from licensed dispensaries, according to Connecticut state law. Reciprocity is not available to residents of other states. 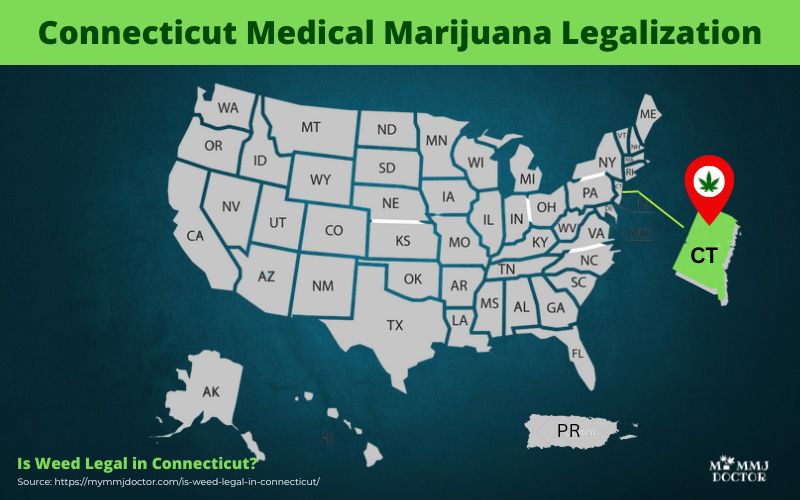 In 2022, patients in Connecticut with an MMJ card can shed their sufferings from their health conditions. History of Legislation in CT
0 reactions • 0 comments
Total 0 •

dum dr. gave me l5s1 with nerve involvment if my legs were human they would say u do it I'm stayin here #doorstop

My spinal cord injury journey started with a fall in my own home in 2019.  I was sitting in my recliner chair watching a movie with my legs propped one behind the other.  As I sat relaxing and enjoying my weekend afternoon, my left leg went, unknowingly, completely numb.  After a period of about one hour, I started [...]

Our newest edition arrived in January! Landon is my 5th grand baby. We now have 4 grandsons and 1 granddaughter 💞. I just came back to The Mighty so this is why I’m posting this now and not in January. Because of Covid, I didn’t get to see him or hold him for 6 weeks. My daughter caught Covid the week she delivered. Landon caught Covid in the hospital. What a weird world we now live in. Everyone is fine so far. Long Covid will probably be a part of Landon’s life but we will have to see. Covid messed up his esophagus and he’s had burning pain every time he eats. A lot of Covid babies have had this. He was admitted to AI DuPont hospital where he was taken good care of. He’s on a new medicine that was brought about by so many babies being born with this same problem. It’s Nexium just like adults take but it had to be specially done for babies. They finally made this medicine because so many babies were being born with this problem from Covid. Before anyone thinks “we’ll it’s just heartburn” it’s not. Not for babies. This baby screamed and cried for the first 2+ months of his life. His esophagus was being burned and damaged. He’s on that great medicine now and Is a very happy baby! Drs. Say only time will tell to see how much damage the Covid caused. The same goes for all the other precious babies as well.💞💞🤗🤗🥰🥰🥰

Hello to all my friends on here who I’ve talked with, cried with and laughed with.
I hope that you will forgive me for abruptly leaving after I tried to come back last year. I loved being a leader and a group leader. I loved writing and sending out the funniest clips I could find. But more than anything I’ve missed your support and your encouragement and your beautiful hearts.
Well, I’m going to try again tonight. I think I’ve healed enough. I’m in a good place.
It was grief and emotions that kept me away for so long.
I’m still bedridden and in worse condition (physically) than before. But I’ll leave that “tell all” for another day lol.
To all the new people… welcome! You’re gonna love The Mighty! I hope to get to know you soon.
#Grief #ChronicPain #Depression #Fibromyalgia #spinal cord injury

Before my illness/injuries took over, I used to really enjoy cooking— even thought about enrolling myself into a culinary arts program. However, I would eventually come to realize, through the years that it simply wasn’t meant to be.

My journey began in 2008, when I was diagnosed with multiple sclerosis. And despite having started a DMT (Copaxone), my symptoms took a turn for the worst in October 2013. One day, while showering, I got hit with an out-of-the-blue case of vertigo, resulting in a fall, which caused my lumbar spinal cord injury.

Despite my best efforts to communicate with my medical team, I wasn’t taken seriously. The only responses that my doctors repeatedly used whenever I’d express my concerns were, “Hmm… I’m not sure if this is from the MS”, or, “Why don’t we increase your medication dose and see what happens” 🙄🤕 This went on for about eight years.

By 2016, my digestive system decided that it’d had enough!!! And just like that 🫰🏾it quit on me. I’d spend the next four years shedding a drastic amount of weight, being unable to keep any food or liquids down, and frantically searching for a doctor to actually listen to me. And all I had to show for my efforts was a traumatic brain injury I’d acquired in November 2018, after having passed out, being rushed to a hospital that was close by at the time, and receiving treatment for dehydration— but not the concussion I’d sustained from having fainted, in the first place. 🙄🤨

By 2019-ish, I’d finally found a team of medical professionals who were as compassionate as they were intelligent; and in March 2020, after I’d withered down to 105 lbs, I had a j-tube surgically implanted. It’s saving my life, for sure, but it still makes for a lonely existence.

Once my digestive issues were “stabilized” (new normal = permanent), it was time for me to get the rest of my poor, exhausted body taken care of. My new neuro team placed me on Ocrevus, which helps tremendously at keeping my nervous system in line; I also have a little helper— a port-a-cath— that gives my medical team the necessary access to my stubborn veins for blood work and infusion days (it literally took a whole team of nurses, and one uncomfortable hour to finally got my veins to cooperate before my port 😳💉🩸).

Next up was Pain Management. After several unsuccessful attempts of conservative treatments (crushing pain pills and flushing them into my tube), it was decided that I would be an ideal candidate for an intrathecal Baclofen pump, which I had surgically implanted in January 2022.

So, what brings me here to the forums? Isolation. As I mentioned previously, living life in a partially bionic body makes for a rather lonely existence 😔 After all, what are the chances of meeting someone else with MS, a TBI, an SCI, and a STRONG affinity for all things audio (unless it’s reruns of classic shows that I grew up with, documentaries, or pretty much ANYTHING to do with British TV, then nope, I probably haven’t seen/don’t want to watch whatever it is you were about to suggest 🤷🏾‍♀️🤣), who also enjoys Bible study, coloring, and word search puzzles? 🦗🦗🦗🦗🦗🦗🎤🎤🎤 (*ahem… um, hello… is this thing on?*)

Probably not… but a girl can dream, right? 😴🤣

Today I found out that on Monday, May 16, I'll start the #hasci program at Thrive Upstate. HASCI means Head and Spinal Cord Injury.