What red flags should I be looking for in therapy?

While we’d all like to believe that therapists are for the most part ethical, committed and caring health care professionals, sometimes this simply isn’t the case.

This article has a clever meme that outlines many of the red flags that could signal you need to find a new therapist: themighty.com/2019/04/crazyheadcomics-therapist-warning-signs

For me personally, the biggest red flag was inconsistent boundaries that vacillated and that made me feel like I was crazy. Boundaries should be clear from the get go and if a therapist is concerned about them, they should address this in a respectful and non-combative way.

What red flags have you encountered with therapists in the past? 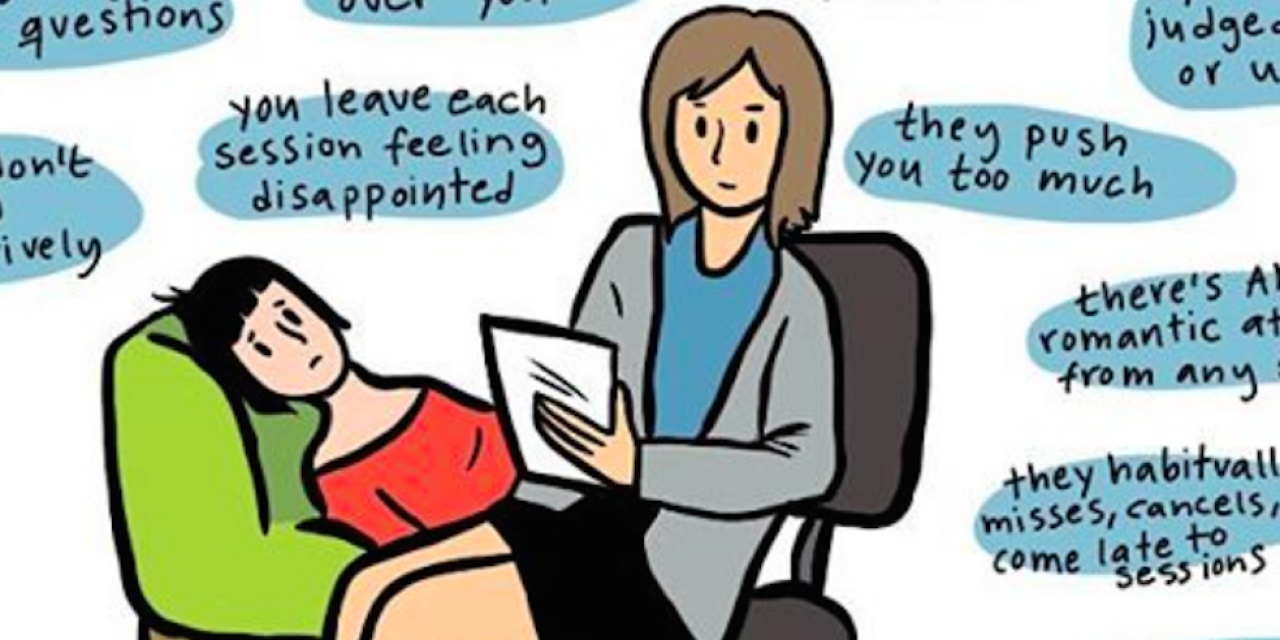 If You've Ever Had a 'Bad' Therapist, This Comic Is For You

Even after 18 years being abused by my father, I strive so hard to see the good in people and the world. I recently went through a breakup where I found out my boyfriend had another girlfriend (she had no idea either). We were long distance which made this easier for him to cover up and lie about but eventually I had to face reality, set boundaries and when they were broken, cut him out of my life. It hurt after investing 2 1/2 months into somebody. I felt used, betrayed, hurt and like somehow something had been my fault. But those around me reassured me that no matter what he chose his actions and I am not responsible for that. I'm now seeing all of the red flags I ignored because I wanted to see him through rose colored glasses. I was lied to, manipulated into gaslighting myself and love bombed. I'm committed to judging someone's character now before letting them in my life and making them prove their intentions before the world relationship is even considered. As well as allowing those around me to weigh in because I'm not the best judge of character due to wanting to see the best and hope the best and not let trauma cloud my judgement. (NEWS FLASH he was lying and did have red flags....) I am a better person taking care of myself for me and keeping my friends close, but this will take some healing and trusting someone again will be hard. If you've read this far, thank you, I just needed to get everything out. Also, what I've learned: Dont let pain make you cold; you're not responsible for another person's choices; if you did your best with what you knew at the time, you did do your best even if you know better now; getting hurt is not worth the dopamine rush (I have adhd); people WILL treat you a certain way based on their character and how they feel about you; if you think you deserve better, you probably do; take the good from a bad situation and move on; givers need limits and boundaries; give grace but dont compromise yourself to do it.

What are “red flags” that you’re overextending yourself?

🚩 Because knowing the signs that you're taking on too much can help you prevent burnout or a breakdown, and it can let others know you might need someone to help carry the weight for a while.

What are red flags? Trust your Inner Sherlock every time.

This is an article I wrote about Red Flags 🚩
Very important to take note of the key questions asked here in this article. I hope this article is helpful and informative.

It’s hard to explain the circumstances under which I lost my virginity.

It happened when I was 24 when I was in an abusive relationship. My boyfriend was quite a bit older than me. He knew I was a virgin and wanted to wait. I knew he wanted sex though. He made that perfectly clear. We had already fooled around a bit. He pushed the boundaries as far as I let him, but he was always pressuring me for more and he’d get mad every time I made him stop. It’s not that I didn’t want to fool around at all. I was just scared because I had never done anything before. I didn’t know yet how much I was comfortable with or how far was too far. I definitely wanted him to slow down and not push it so much, and I told him that, but he still kept pushing it. I was worried about doing anything sexual because I knew that once we started messing around, he’d want to keep going, but I wasn’t ready to go all the way. I just wanted to take it slow.

It finally happened when we’d been together about two months. As usual, everything happened so fast. Once it started, I couldn’t get him to slow down. I was nervous and I definitely said wait, but he kept telling me to relax. I didn’t want to make him mad by refusing to go further again. I knew it was coming, and I just decided to get it over with. I let him do what he wanted. When it was happening, I remember feeling numb emotionally. I wasn’t comfortable with it, but I let it happen. I remember it hurt, but I didn’t tell him to stop. I just sort of held my breath and knew it would be over soon. When he was finished, I didn’t say anything. I just laid there next to him feeling dirty and numb.

It wasn’t sexual assault. I don’t even think it could be considered non-consensual because I never said no when it happened. I don’t know. At the very least, it crossed over a boundary I wasn’t ready to cross yet. We had sex many times after that, and it still took a while before I was comfortable with it. I knew to expect it and I allowed him to do what he wanted, but it was another couple of months before I wanted it. At some point, he could tell I was finally into it too. He actually said he was glad I didn’t seem scared anymore when we had sex. Looking back, the fact that he said that really bothers me. I wish I would have asked him why he continued to have sex with me if he knew I was scared.

Our relationship only lasted six months. He was abusive in so many ways. When it ended, I actually had to petition for a restraining order against him so it would finally be over. Now that I’ve had a couple of months to gain perspective on everything that happened between us, I still don’t know how to wrap my head around our sexual relationship. I honestly try not to think about how it started because it makes me feel very uneasy. It’s just complicated and I don’t know how to feel about it or process the way it happened. It feels more like coercion rather than consensual. #Sex #Coercion #Consent #AbusiveRelationship #EmotionalAbuse #RedFlags #CheckInWithMe